Russia's Military Can't Function Without This One Piece of Technology 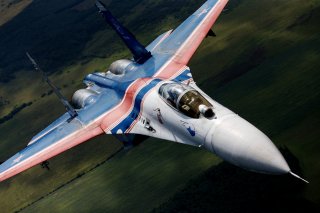 Here's What You Need to Remember: Raduga and APD-518 were “first generation” datalinks mostly used for the MiG-31 interceptors, with the Raduga being larger and more powerful.

On the twenty-first century battlefield, datalinks are some of the most important features of any military vehicle. Ideally, datalinks are able to transfer and forward lots of data, are resistant to jamming, and are easily integrated into existing aircraft. As a result, as part of air force modernization, Russia is in the process of developing and fielding the next generation объединенная система навигации и обмена данными (OSNOD) datalink.

In Western media, the OSNOD datalink is generally considered to be linked to the fifth generation Su-57/PAK FA fighter project. But the project has been running for a long time, to replace the earlier Raduga (Rainbow), APD-518, and TKS-2 and TKS-2M datalinks. Raduga and APD-518 were “first generation” datalinks mostly used for the MiG-31 interceptors, with the Raduga being larger and more powerful. TKS-2 and TKS-2M datalinks were fitted standard to Su-27S and later Sukhoi fighters, though they were also retrofitted to MiG-31s in later variants to replace the APD-518 datalink.

OSNOD improves on previous generation datalinks in almost every aspect, doubling the amount of bits per message while also increasing jam resistance and probability of intercept. But it also promises to integrate with naval and land systems (hence the объединенная integrated in the name). This would make OSNOD into a close equivalent to Link-16 for NATO, which is widely integrated across most major naval and air services.

OSNOD is planned to be a standard, leading feature for the Su-57, and underwent testing in 2019. There are also plans to fit it to drones. OSNOD is also being retrofitted to earlier Sukhois, though the rate and extent to which this is happening is unclear. It is confirmed that OSNOD will be fitted to Su-30SMs, but whether it will be part of the fit of recently delivered Su-35s and MiG-35s, or put into Su-27SM3s is unclear. There are also standalone terminals for ground and sea usage, but information about the integration of OSNOD onto them is scarce.

If OSNOD reaches full capability similar to Link-16, it could significantly increase the potency of Russia’s military by granting it cooperative engagement capabilities (CECs). Many Russian systems are limited in range not by the power of the engines or boosters on the weapon itself, but rather by the ability for sensors to acquire and lock onto targets. Linking S-400s to AWACS or fighters could allow them to stretch their legs further, engaging targets near the full kinematic range of the missile, rather than being limited by what ground-based radars can acquire and track.