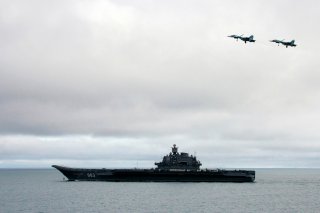 Here's What You Need To Remember: Ultimately, what makes the U.S. Naval Aviation program dominate the skies isn't the billions of dollars poured into equipment (although that certainly doesn't hurt) - it's the training. Russia has plenty of the former, but, as recent events have shown, are coming up short in the latter.

Meanwhile, the earlier loss of the MiG-29KUBR is indicative of poor decision making on the part of the Russian commander—who should probably have diverted the jet to a shore base in Syria. U.S. Navy carriers—when operating close to shore—will designate divert airfields in case there is a serious emergency where the ship cannot recover its aircraft. Indeed, the carrier usually launches recovery tankers—aerial-refueling-configured Super Hornets—to ensure that jets have enough fuel to operate safely. While Kuznetsov does not have the ability to launch a tanker—or even buddy-refueller configured fighters—the Russians should have designated a divert field for emergencies.

As a force designed to project American power across the globe, the U.S. Navy has designed its procedures to enable safe carrier operations even in the middle of the ocean—far from any land bases.  “Blue water ops enable the carrier and air wing to conduct flight operations anywhere, anytime,” the second naval aviator said. “We utilize tankers to provide the required gas — ‘front side’ gas to give us more to train with, with ‘back side’ gas available as required when an aircraft’s fuel state gets low.”