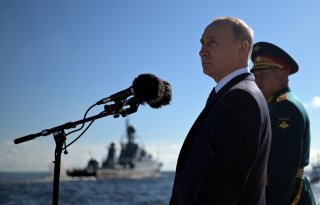 Here's What You Need To Remember: The contract for the two nuclear-powered submarines was signed at the Army-2019 arms show last year, and the boats are expected to be put afloat in 2024 and 2025 and delivered to the Russian Navy under the existing state armament program by the end of 2027.

Even as its economy is slowing, Moscow has been making a big play to build more warships and submarines, and in July Russian shipbuilders announced that they would lay down two multi-purpose Project 23900 amphibious assault ships, two Project 22350 frigates, and two Project 885M "Yasen-M" multi-purpose nuclear-powered submarines. The Yasen-M line is expected to occupy the same performance league as the U.S. Navy's Virginia-class of fast-attack submarines.

State media has reported that the two boats – Voronezh and Vladivostok – laid down last month at the Sevmash Shipyard will carry upgraded Kalibr-M cruise missiles, which will be capable of delivering either conventional high-explosive fragmentation or nuclear warheads to a target and at further ranges that will make some in Washington uncomfortable.

"The new multi-purpose submarines will carry principally new Kalibr-M missiles with a firing range of over 4,000 km," a source in the Russian defense industry told Tass during last week's Army-2020 International Military and Technical Forum, which was held outside of Moscow from August 23 to 29. "The new submarines will be better prepared for the mission of non-nuclear strategic deterrence compared to their predecessors."

The Kalibr-M cruise missile was developed as part of scientific research that was financed by Russia's Ministry of Defense. By comparison, the original ship-launched Kalibr missile has a range of just 1,500 to 2,500 kilometers – but the improved version is also able to carry a warhead that can approach one ton. It is comparable to other conventional and nuclear warheads and can be used to destroy land facilities.

Already the Kalibr-M's predecessor version was used in such a role when it was launched from a Kilo-class submarine against ISIS emplacements in the Raqqa region of Syria.

The contract for the two nuclear-powered submarines was signed at the Army-2019 arms show last year, and the boats are expected to be put afloat in 2024 and 2025 and delivered to the Russian Navy under the existing state armament program by the end of 2027.

The baseline Project 885 lead nuclear-powered underwater cruiser Severodvinsk was launched in June 2010, commissioned in late December 2013 and entered service with the Russian Navy in 2014.

The upgraded Project 885M lead submarine Kazan is set to be delivered to the Russian Navy by the end of this year, and five additional boats of the class are currently in various stages of construction at the Sevmash Shipyard, which is part of the United Shipbuilding Corporation.

Originally, the Kazan was set to be delivered by 2018, but a slowdown in the Russian economy had delayed the construction of the advanced submarine. The upgraded Project 885 submarines utilize new technological developments that emerged since Severodvinsk started construction in 1993.

Both the Project 885 and 885M submarines are armed with Kalibr-PL and/or Oniks cruise missiles and will eventually carry Tsirkon hypersonic missiles as their basic weapons.