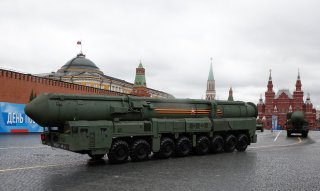 Here's What You Need to Remember: While beginning as road-mobile weapons, the Yars missiles have also reportedly been migrating into and tested in silos as well, a circumstance which multiplies threats to the United States by presenting both better-protected Yars missiles as well as road-mobile Yars missiles able to maneuver and obscure a launch position from overhead sensors.

The Yars missiles, which will replace the Topol ICBMs, are engineered with multiple independently targetable reentry vehicle warheads, according to the Russian TASS news agency. TASS reports that there were 360 Topol launching systems in ten divisions of the Russian strategic missile forces in 1999, a number being incrementally replaced by more modern Yars weapons which first launched for flight in 2007.

“The missile is also believed to be fitted with a newer RV design that will allow the RV’s to maneuver in space and during re-entry,” according to Russian officials. “The total launch weight of the RS-24 is assessed to be 49,000 kg and is expected to have a minimum range of 2,000 km and a maximum of 10,500 km.”

The missile is estimated to be 22.5 meters in length and two meters in diameter.

The biggest question hanging over the Yars missile, which may not be answerable, is the extent to which the missiles are engineered for longevity, resiliency and reliability. As part of this, will the Yars missile in any way be able to accommodate new upgrades and be sustained for decades into the future? These are the variables that inform the U.S. Air Force’s development of its new, fast-emerging ICBM called the Ground-Based Strategic Deterrent (GBSD).

While there are of course many unknowns with these kinds of weapons, for obvious reasons, longevity, an ability to modernize, sustainability and combat reliability are all major factors for the developers of the GBSD. The Air Force plan is to operate the new weapons into the 2080s and beyond. Given that the Yars weapons dates back to 2004, it seems likely that the GBSD is far more advanced in terms of technological capabilities in terms of targeting, sustainment and longevity.