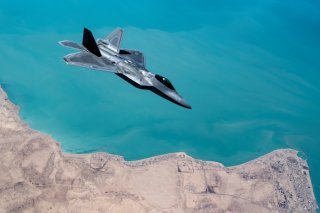 Here's What You Need to Remember: The Su-57 Felon first took to the skies in January 2010, where it has been shown to combine the functions of an attack plane and a fighter jet. The fifth-generation single-seat, twin-engine aircraft was designed for air superiority and attack operations. It also can destroy a wide array of targets, including other aircraft.

On Christmas Day last year, it was announced by Russian state media that a regiment in the Russian Southern Military District received quite a notable "present" – it was the first batch-produced Sukhoi-57 Felon multi-role fifth-generation fighter jet. At least another four of the jets could be provided to the Aerospace Force this year.

"The Aerospace Force has obtained the first batch-produced Sukhoi-57 plane," a source in the defense industrial complex told Tass. "It was delivered to a regiment in the Southern Military district."

Russian Minister of Defense Sergei Shoigu also said during a Defense Ministry board meeting that a total of twenty-two of the aircraft would be provided by the end of 2024. Under the current contract, which was signed in 2019, a total of seventy-six Su-57s are to be delivered by the end of 2028.

The Su-57 Felon first took to the skies in January 2010, where it has been shown to combine the functions of an attack plane and a fighter jet. The fifth-generation single-seat, twin-engine aircraft was designed for air superiority and attack operations. It can destroy all types of air, ground and water-based targets. The use of composite materials along with an aerodynamic configuration provided a low level of radar and infrared signature.

The Su-57, which is also the first Russian aircraft to utilize stealth technology, was further designed to have supercruise, supermaneuverability and advanced avionics to overcome attacks from the prior generation fighter aircraft as well as ground and naval defenses. The multirole aircraft also has supersonic cruise speed, internal weapons bays, radio-absorbing coating and the newest onboard equipment. In addition, the Su-57 felon features a unique radar system that is spread across its body, and it is the only fighter in the world to feature this "Directed Infrared Countermeasure System" (DIRCM).

The aircraft also utilizes a missile-spoofing turret designed to protect the fighter from infrared-guided missiles. Exactly how successful that could be on a high-flying fighter is unknown, as it has previously largely been employed only on transports and helicopters. Unlike it was deployed on the Su-57, a spoofing turret never has been placed on the ventral side of an aircraft.

At the August 2013 MAKS air show (see video below) outside of Moscow, several Su-57 test planes took to the sky, while the aircraft's manufacturer also showed off missiles that could be fitted into the fighter's voluminous weapons bays or under its wings and fuselage. There have also been reports that the plane's armament could include hypersonic missiles.

The performance and capabilities of the aircraft were reportedly tested in Syria, but in late 2019 the reliability of the platform was questioned when a Su-57 crashed and exploded during a training session in Russia's Far East. The fighter was believed to be the first serially produced Su-57 Felon, which was supposed to be transferred to the Russian Air Force. That delayed the deployment of the first aircraft until this past December.

This article was posted earlier, and is being reposted due to reader interest.