Russia's Successor to the S-400 Missile System Is Here 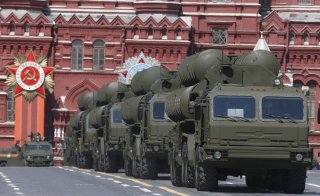 Here's What You Need to Know: Initially slated for completion in 2012, the S-500 project has faced a long procession of delays over the past decade.

“The state trials have just completed, and the first supplies of this complex have started,” Russian deputy prime minister Yuri Borisov told reporters. “That is not yet the full range as the Almaz-Antey Concern requires. The configurations of the complex were discussed.” Borisov did not elaborate further and his somewhat hazy statement did not become clearer when interpreted in its original Russian. The implication appears to be that certain components are missing from the handful of S-500 units that are currently being delivered to Russia’s Armed Forces. These could be core components without which the system will not function as intended or additional loadout options like different interceptor missile types. Borisov’s statement potentially suggests something of a soft launch for the new missile system, though the details remain unclear as of the time of writing.

The S-500 “Triumfator-M” is Russia’s new flagship missile system, promising across-the-board performance improvements over the country’s current S-400 Triumf. With four radar vehicles per battery, the S-500 reportedly boasts an effective operating range of six hundred kilometers against ballistic missile threats and five hundred kilometers for area defense. The system is believed to be capable of detecting ballistic missiles at a range of up to two thousand kilometers and can track as many as ten ballistic missiles flying at speeds of around seven kilometers per second. Armed with the new, reportedly hypersonic family of 77N6 interceptor missiles, the S-500 is believed to be capable of intercepting hypersonic cruise missiles and intercontinental ballistic missiles, as well as other aerial objects flying at a speed of over Mach five. It is widely reported that a naval variant of the S-500 will be featured on Russia’s upcoming Project 23560 Lider-class destroyer.

Initially slated for completion in 2012, the S-500 project has faced a long procession of delays over the past decade. The cause of these delays was never made clear, as the system’s development history is being kept tightly under wraps by Moscow. The first ten units entered serial production earlier in 2021, with Russia’s Deputy Defense Minister Alexei Krivoruchko announcing in December 2020 that the S-500 will be introduced into service by the end of 2021.

Despite being branded as a successor to the S-400, there is no indication that the S-500 will be mass-produced in sufficient numbers to widely replace its predecessor any time soon. The S-500 is meant not to substitute, but to complement, the S-400. Though there is a degree of role overlap between the two systems, the S-500 nevertheless fills a unique niche against advanced threats like hypersonic missiles and drones, as well as next-generation stealth fighters. The S-500 will serve alongside older and less capable systems like the S-400 and S-300 to form an additional layer on top of Russia’s echeloned missile defense network, offering what Moscow believes to be unprecedented capabilities against the latest and most dangerous threats.