Russia's Syria Intervention Has Been A Mixed Blessing For Moscow 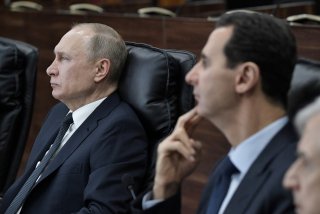 Here's What You Need To Remember: Long-term stability in Syria almost seems quixotic, more likely measured in decades than years. It will take time to assess the extent to which Russia has “won” in Syria. Absent a peaceful end to the conflict and an infusion of large-scale Western aid, downside risks for Russia could take some of the bloom off of its rose in Syria.

Russia’s intervention in Syria has led to claims of a win, but the blessing may be mixed. Although Russia has cemented its status as a Middle Eastern great power, economic weakness at home is eroding support for the intervention and Syria is a failed state trapped in a civil war.

After the Soviet Union collapsed in 1991, Russia largely withdrew from the Middle East. By ramping back up its involvement, President Vladimir Putin has stroked the longing of many Russians for their country to be in the first rank of global powers.

Outsized military and energy power are key to this. Russia uses force even against civilian targets and arms clients. It plots with Saudi Arabia to affect the world oil market. In the Middle East, the Kremlin has a knack for skillful diplomacy—it has ties with all key players—and for taking calculated risks that have paid off.

Russia’s intervention in Syria in 2015 helped rescue the regime of President Bashar Assad, which was reeling from defeats at the hands of various rebel groups, including ISIS and Al-Qaeda-linked groups. As a reward, Russia may be allowed to base more naval and air power in Syria, capable of holding at risk NATO forces throughout the eastern Mediterranean region. This is a key Russian goal.

Juxtaposed with these gains, the Kremlin faces two main problems: a domestic backlash against an unpopular intervention and the inability to help Syria rebuild.

In 2017 a poll by the independent Levada Center found that 49 percent of respondents thought Russia should end its military operations in Syria, versus 30 percent who wished them to continue. The U.S. pullout may heighten perceptions in Russia of a win, something its media trumpets.

Still, many Russians see military interventions in Syria and eastern Ukraine as costly “foreign adventures.” This reflects in part a growing unease that Russia is suffering another “era of stagnation,” a phrase that harkens to the poverty and torpor of the Brezhnev era.

Russia’s GDP is just one percent higher than five years ago. Levada Center polls show that every year from 2008 through 2018, more Russians viewed the current year as harder, rather than easier as compared with the previous year.

Impecunious Russia may do little to help Syria rebuild. A year ago the United Nations estimated that the war had cost Syria some $388 billion in physical destruction. Human capital costs are also tremendous. The UN estimates reconstruction costs at $250 billion, about four times Syria’s prewar GDP.

Last year the French emphasized that the European Union will not help rebuild Syria “unless apolitical transition is effectively carried out, with constitutional and electoral processes.” The United States holds a similar view. Other inhibitors may include donor concern over quality, risks of corruption and spillage, and sanctions on Assad.

In Syria, another risk is that violent non-state actors, including Iranian forces and Shiite militias, and ISIS could hijack resources, impede reconstruction, or seek to extort or tax locals working on construction projects.

The Kremlin is frustrated that the West is not paying up. In January 2018 the Russian ambassador to the EU alleged that European states would “bear responsibility” if they did not begin within months to spend “dozens of billions of euros” on reconstruction. In an argument that Moscow is sure to replay in Europe, Foreign Minister Sergey Lavrov has asserted that U.S. refusal to aid Syria’s rebuilding would deter refugees from returning home.

Russia will benefit more from intervention in Syria if fighting were to subside and economic progress to begin. This would likely require a political settlement, brokered through the UN, which reduces violence and is amenable to the main parties. This will be harder to achieve if the Kremlin remains reluctant to press Assad to make concessions for peace.

Long-term stability in Syria almost seems quixotic, more likely measured in decades than years. It will take time to assess the extent to which Russia has “won” in Syria. Absent a peaceful end to the conflict and an infusion of large-scale Western aid, downside risks for Russia could take some of the bloom off of its rose in Syria.

Colin P. Clarke is an adjunct senior political scientist at RAND and a senior research fellow at The Soufan Center. William Courtney is an adjunct senior fellow at RAND and a former U.S. ambassador to Kazakhstan, Georgia, and a U.S.-Soviet commission to implement the Threshold Test Ban Treaty. This article is being republished due to reader interest.