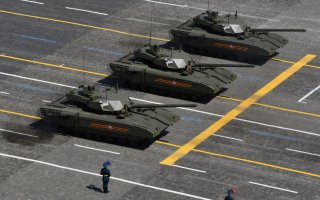 Key Point: Despite some setbacks, the Armata’s trials with Russian troops are proceeding in accordance with schedule.

This week Russia’s Defense Ministry announced that the production of tanks and fighting vehicles based on the latest Armata combat platform was underway. Earlier this year Russia’s Industry and Trade Minister Denis Manturov told state media that Moscow was planning to start work with foreign customers of the Armata tank in 2021 and had already received several prior requests.

Now after numerous delays, in part due to the novel coronavirus pandemic, that work has finally begun.

“Yes, the work is underway,” Manturov told Tass on Monday, when asked whether the production of the armored vehicles had moved forward.

Last month, the head of Russia’s Federal Service for Military and Technical Cooperation, Dmitry Shugayev, told reporters that Russia has started promoting the latest T-14 tanks for export. The fact that Russia has begun to offer foreign sales of the well-known and highly-touted tank has raised questions about the extent of Russian alliances.

Russia’s state arms seller Rosoboron export had previously announced that the T-14 tank and the T-15 infantry fighting vehicle based on the Armata combat platform would be demonstrated to potential foreign buyers at the Army-2020 international arms show in August. Despite the coronavirus pandemic that event is still scheduled to take place at the Patriot Congress and Exhibition Center of the Russian Armed Forces in Kubinka outside of Moscow from August 23–29. It has been reported that the event will feature demonstrations of 730 items of armament and military hardware.

Too Few, Too Expensive

The T-14 tank, which is based on the Armata platform, was shown to the public for the first time at Red Square’s Victory Day parade on May 9, 2015. The new combat vehicle features fully digitized equipment, an unmanned turret and an isolated armored capsule for the crew.

It has also been noted that while the T-14 Armata tank does have advanced capabilities that could give it an advantage over the American Abrams, the Russians simply may not have enough T-14s to actually present a credible threat. It is unclear whether the current production changes that dynamic.

Moreover, the tanks have faced a slew of technical problems, while in May it was reported that three T-14s were hit by TOW-2B anti-tank systems and one Armata was completely destroyed. It is unclear if any of the ongoing problems contributed to how the tanks allegedly performed in combat.

The developer of the T-14 Armata tank has worked to resolve the most notable problems including those with its engines and thermal imagers.

“Yes, the problems with both the engines and the thermal imagers have been resolved,” Manturov said. “The engine generates the parameters and the technical characteristics that were laid out in the performance specifications upon its designing. As for the thermal imagers, I can confidently say that we have a fully import-substituted Russian product that is made by Shvabe [Holding].”

Despite the setback, the Armata’s trials with the troops are proceeding in accordance with the schedule, the minister said.

However, the foreign sales could remain crucial as the tanks cost upwards of $4 million apiece, and as a result, initial plans by Moscow to buy 2,300 of the T-14s by 2025were  pared down significantly. Unless Russia can find foreign customers to help offset the costs, the T-14 could be simply too expensive for the Russian Army.