Russia's T-34 was a Panzer Crusher 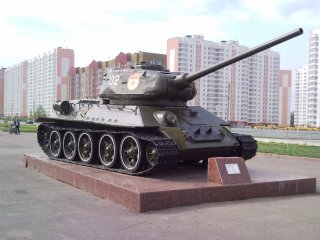 Here's What You Need to Remember: The final verdict on the T-34 perhaps is less glowing than the legend that the Soviets weaved around the tank, but the T-34 tipped the balance in favor of the USSR when it came to armored battle and that's what matters.

On June 22, 1941, Nazi Germany launched Operation Barbarossa, a massive attack on the Soviet Union that was the largest invasion in history.

The Germans expected to face an inferior enemy—the Slavs whom Adolph Hitler called untermenschen. Giddy from victories in Poland and France, Hitler and many in his military high command believed it was the destiny of Germany to invade Russia. “The end of the Jewish domination in Russia will also be the end of Russia as a state,” Hitler announced in his manifesto Mein Kampf.

For months Germans won victory after resounding victory. But then the attack stalled—and the appearance of a new Soviet tank stunned the Wehrmacht.

It was the T-34. The new armored vehicle had an excellent 76-millimeter gun and thick sloped armor and cruised at more than 35 miles per hour. It possessed many advanced design features for the time—and it could blow German Panzers to Hell.

The T-34 had its problems—something we often forgotten when discussing a tank with a legendary reputation. The shortfalls included bad visibility for the crew and shoddy Soviet workmanship.

“They were good, but they were not miracle weapons and they had their faults,” writes Philip Kaplan in Rolling Thunder: A Century of Tank Warfare. “But the T-34, for all its faults, is now often referred to by tank experts and historians as possibly the best tank of the war.”

World War II German Field Marshall Ewald Von Kleist was more succinct. “The finest tank in the world,” is how he described the T-34.

The origins of the T-34 are simple enough. The Red Army sought a replacement for the BT-7 cavalry tank, which was fast-moving and lightly armored for use in maneuver warfare. It also had Christie suspension, one reason for the tank’s increased speed.

But during a 1938-to-1939 border war with Japan, the BT-7 fared poorly. Even with a low-powered gun, Japanese Type 95 tanks easily destroyed the BT-7s. Tank attack crews also assaulted the BT-7s with Molotov cocktails, reducing the Soviet tank to a flaming wreck when ignited gasoline dripped through chinks between poorly welded armor into the tank’s engine compartment.

The T-34 was the solution. It kept the Christie suspension, replaced the gasoline engine with a V-2 34 V12 diesel power plant and offered the crew speeds that were 10 miles per hour faster than the German Panzer III or Panzer IV.

Furthermore, the T-34’s high-velocity gun was capable of killing any tank in the world at the time.

“In 1941 when Hitler launched Barbarossa, the tank was indisputably the best in the world,” Jason Belcourt, a veteran of the U.S. Army who served in the armor branch, told War Is Boring. “The combination of sloped armor, big gun, good speed and good maneuverability was so much better than anything the Germans had on tracks.”

By mid-1941, the USSR had more than 22,000 tanks—more tanks than all the armies of the world combined, and four times the number of tanks in the German arsenal.

By the end of the war, the Soviet Union had produced nearly 60,000 T-34 tanks—proving the point that quantity does have a quality all of its own.

At first, the Germans were at a loss when it came to countering the threat the T-34 posed. The Germans’ standard anti-tank guns, the 37-millimeter Kwk36 and the 50-millimeter Kwk 38, couldn’t put a dent in the Soviet tank with a shot to its front.

That left the Germans with a limited set of tactics. German tankers could attempt flank shots with their guns. The Wehrmacht could lay mines. Soldiers risked their lives in close assaults employing satchel charges and Molotov cocktails.

In what could be called an act of desperation, the Germans even used modified 88-millimeter anti-aircraft guns to stop attacking T-34s with direct fire.

But the Russians never had enough trained crews for the tanks the Red Army fielded. The Soviets wasted the T-34 and its crews in vast numbers.

By the time the Soviets trained enough crews to man the T-34s, the Germans had tanks with high-velocity guns and better anti-tank weapons like the Panzerfaust, a recoilless anti-tank weapon with a high-explosive warhead.

But the Russians always had more T-34s than the Germans had Panzers or Tigers.

“Where the tank was decisive was in the battle of production,” Belcourt said. “From June 1941 until the end of the war, the Soviets were always producing a tank that was often good and never worse than adequate.”

The final verdict on the T-34 perhaps is less glowing than the legend that the Soviets weaved around the tank—but is still complimentary. The T-34 tipped the balance in favor of the USSR when it came to armored battle; mass production of the tank outmatched anything the Germans could do when it came to manufacturing.