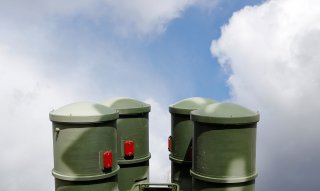 Here's What You Need To Remember: The system isn't scheduled to be deployed until next year - but it's already set records, and caused no shortage of consternation among Western defense planners.

As Vladimir Karnozov at Aviation International News reported years back, the S-500 uses several types of missiles. When used against air breathing targets, the S-500 can use the 48N6 family of missiles, which weight about two tons and have an effective range of up to 130 nm (240 kilometers). For longer-range targets, Karnozov reports that the system uses version of the 40N6 with higher performance. It also employ the shorter range and lighter weight 9M96 and 9M100 family missiles, which weigh 530 pounds (240 kg) and upwards.