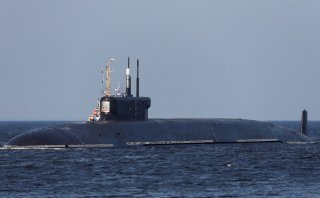 Here's What You Need to Remember: Yasen-M’s biggest accomplishment is its success in considerably narrowing the stealth gap between U.S. and Soviet submarines that persisted throughout the Cold War.

One of the first serially produced Yasen-M submarines, K-573 Novosibirsk, is slated to enter service in Russia’s Navy later this year.

“The nuclear submarine will be handed over to the fleet in the fourth quarter of 2021,” a defense industry insider source told the Russian news outlet TASS earlier this week. “Prior to that, the Novosibirsk is to complete the manufacturer’s sea trials and state trials,” the source added. Additionally, the Navy will reportedly receive K-561 Kazan, the first Yasen-M boat, in the first quarter of 2021.

The Yasen class is a new line of nuclear-powered cruise missile submarines, designed to phase out Russia’s aging, Soviet-era attack submarines. The original Yasen boat, Severodvinsk, was laid down in 1993, but construction work sputtered in the years following the Soviet collapse. Trapped for decades in a vicious circle of cyclical delays and budget deficits, the submarine was launched only in 2010.

The Yasen class was then refreshed under the Yasen-M designation, an upgrade package meant to account for the sixteen-year gap between the Severodvinsk and all subsequent Yasen vessels. Yasen-M brings minor design updates, possibly including a sharper bow. The new revision is stealthier, reportedly utilizing low magnetic steel for a reduced magnetic signature and the latest nuclear reactor technology for reduced overall acoustics.

Yasen-M will also boast a modernized onboard electronics suite and expanded armament compatibility. The full extent of Yasen-M’s weapons loadout remains unclear, but will possibly include the upcoming Kalibr-M cruise missile, which—at 4,500 km versus 1,500- 2,500 km—boasts nearly twice the range of the original 3M14 “Kalibr” missile off which it is based. The submarines will also support the new 3M22 Tsirkon winged anti-ship hypersonic cruise missile, which is reportedly capable of hitting targets at a speed of over eight Mach or around 9800 kilometers per hour. The Yasen-M class retains the same, standard ten 533mm torpedo tubes of the original Yasen line.

Its modernized arsenal notwithstanding, Yasen-M’s biggest accomplishment is its success in considerably narrowing the stealth gap between U.S. and Soviet submarines that persisted throughout the Cold War. As explained in an in-depth comparison by The National Interest, the Yasen class is thought to be able to trade performance blows with its closest competitor, the U.S. Virginia class, though the latter likely retains an acoustics edge. Admiral Robert P. Burke alluded to the Yasen submarines at a recent event hosted by the Center for Strategic and International Studies, describing them as a “real threat” to North Atlantic Treaty Organization assets in the North Atlantic.

Of the eight planned Yasen vessels, two—Kazan and Novosibirsk—have been launched and are on the verge of entering service in the Northern and Pacific fleets respectively. Six more are in varying stages of construction, with the next three— Krasnoyarsk, Arkhangelsk, and Perm— slated to be launched this year. Following several rounds of delays over the prior decade, the Navy plans to accept all of the remaining Yasen-M submarines into service by 2027.