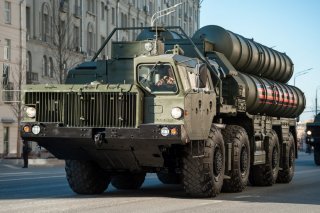 Here's What You Need to Remember: The S-400 builds upon the existing strengths of the S-300 to make it an even more deadly threat; maintaining advanced features like interchangeable modular missiles, ballistic missile interception, and multichannel engagement.

The main customer for the new missile was the Soviet PVO or air defense forces. They adopted the first version of the S-300, the S-300PT. All “P” missiles were meant to be for the PVO. The S-300PT involved a towable TEL (Transporter, Erector, Launcher) and towable radar that relied on heavy trucks to reposition. The set also included a fire control system. This was good enough for relatively stationary PVO duties but was not an ideal solution.

One key feature of the S-300V system is that it has two TEL variants, a TEL with four shorter ranged (75 kilometers) 9M83 missiles and a TEL with two longer-ranged (100 kilometers) 9M82 missiles. The TEL, radar, and command post sets for the S-300V are mounted on a tracked chassis (the same as the 2S7 artillery piece) for better off-road mobility in contrast to the S-300PS. The S-300V was accepted into service in 1985.

Another key aspect of the S-400 is the ability to use four different types of missiles with different weights and capabilities, allowing the system by itself to form a large portion of layered air defense. This makes the S-400 a more flexible system. It also can utilize missiles employed by earlier S-300 variants.

While the capabilities of the S-400 may appear to be a significant leap, they got there through the slow evolution of earlier S-300 missiles. Many of the advanced features, such as ballistic missile interception, interchangeable, modular missiles, and multichannel engagement have been present in the system for a long time, and the S-400 just builds upon the existing strengths of the S-300 to make it an even more deadly threat.