The Sad Tale of the Imperial Japanese Navy’s Sinking Shinano 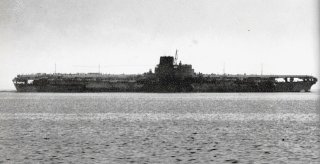 Here’s What You Need to Remember: If weight alone could determine victory, then the Imperial Japanese Navy aircraft carrier Shinano might still be afloat.

At 69,000 tons when launched in 1944, the Shinano would have remained the world's largest aircraft until the 1960s. But that was not to be. Instead the Shinano earned a distinction of a different kind: the title of largest warship ever sunk by a submarine.

The story begins in May 1940, when the Shinano was laid down as the third of Japan's legendary Yamato-class battleships. These giants were the largest battleships in history, built as part of Japan's desperate attempt to counter U.S. naval quantity with a few—hopefully—qualitatively superior warships. If all went according to plan, the Shinano would join her sisters Yamato and Musashi as the three queens of Second World War battlewagons.

Yet by 1942, Japan began to realize that it needed aircraft carriers more than battleships. Naval warfare was now ruled by these floating airfields, and Japan had lost its four best at the Battle of Midway. The orders came down to convert Shinano into an aircraft carrier such as the world had never seen.

At 69,000 tons, it was the double the tonnage of the Essex-class carriers that won the Pacific War for America, and would remain the largest until the advent of nuclear-powered carriers in the early 1960s. Its main deck, already sheathed in armor up to 7.5 inches thick, became the hangar deck where aircraft were serviced. On top was the flight deck to launch and recover planes, itself protected by 3.75 inches of armor.

Instead of the devastating eighteen-inch cannon of her two sisters, the Shinano's main armament was supposed to be forty-seven aircraft, rather stingy compared to the 75–100 aircraft on large U.S. and Japanese carriers. But its weaponry was still impressive: sixteen five-inch antiaircraft guns, 145 25mm antiaircraft machine guns and twelve multiple rocket launchers with 4.7-inch unguided antiaircraft rockets.

The Shinano's designers learned—or thought they had learned—the lessons from the sloppy damage control that had unnecessarily doomed several Japanese carriers. Flammable paint and wood were avoided. Care was taken to protect ventilation shafts so explosive gases couldn't seep through the ship as they had with other Japanese carriers.

But the Shinano's impregnability was only skin deep. "Although he was outwardly serene, Captain Mikami felt pressing concern about the ship's watertight compartments," later wrote Joseph Enright, the Archerfish's captain. "The air pressure tests that would have confirmed his hope that the compartments were watertight had been canceled in the rush to move Shinano to the Inland Sea."

Sailors can be a superstitious lot, and there was a bad omen when the ship was launched on October 8, 1944 from Yokusuka naval base. A drydock gate buckled, allowing a surge of water to smash the ship against the drydock wall three times. After repairs, it took to sea on November 28, the carrier took to sea with its three-destroyer escort, headed toward the Kure naval base. It carried some suicide boats and kamikaze flying bombs, but no aircraft to fly antisubmarine patrols through Japanese home waters, which were teeming with U.S. submarines.

Unfortunately, the Shinano ran into the Archerfish that night, cruising on the surface and on the prowl. The sub was on its fifth war patrol, but it had yet to sink an enemy vessel. Captain Enright decided he needed to sail to a point ahead of his target, submerge so the destroyers wouldn't spot him and fire his torpedoes. That wasn't an easy prospect in World War II, when surface ships could steam faster than submarines.

The Archerfish paralleled the Japanese task force. It also turned on its radar to track them, which was detected by receivers on the Shinano. The Japanese captain worried about a massed attack by an American sub wolfpack, but he didn't worry that much. Hadn't the Shinano's sister ship Musashi endured ten torpedo hits and sixteen bombs before succumbing at the Battle of the Philippine Sea? Despite the numerous U.S. subs infesting Japanese home waters, the carrier's watertight doors were opened to allow the crew access to the machinery.

The Japanese force zigged and zagged to throw off any undersea pursuers. And then came that bit of luck that often tips every battle. The Japanese ships zigged one more time, straight into the path of the Archerfish. The sub took its chance. At 3:15 am on November 29, it fired six torpedoes. Four hit.

Still, the Shinano's crew wasn't unduly worried. The ship was designed to absorb such damage, and in fact continued to try to sail at maximum speed. But water flooded through the holes in the ship's side, flowing into unsecured spaces and through what should have been watertight doors. Pumps and generators failed. Soon the carrier acquired a list to starboard that only got worse.

The Shinano's escorting destroyers attempted to tow it, but to no avail. At 10:18 am, seven hours after the attack, the order was given to abandon ship. At 10:57 am the ship sank, along with 1,435 of its crew, including the captain.

A postwar U.S. Navy analysis suggested the Yamato-class ships, including Shinano, suffered from design flaws. The joints between the main armored belt and the armored bulkheads below were vulnerable to leakage, and the Archerfish's torpedoes hit that joint. Some bulkheads were also prone to rupture. Then again, the Shinano was hardly the lone victim of subs. The United States lost the carrier Wasp to Japanese torpedo attack, and several British carriers fell victim to German U-boats.

Perhaps there was also bad luck. Bad luck into running into the Archerfish, bad luck in zig-zagging straight into the path of a salvo of torpedoes, bad luck that the torpedoes hit a vulnerable spot.

In the end, the Shinano would make history—and then sink into the cold, deep waters of the Pacific.

For further reading: Shinano: The Sinking of Japan's Secret Supership by Joseph Enright and James Ryan.