The Safest Place to Ride Out a Nuclear War? Maybe Moscow. 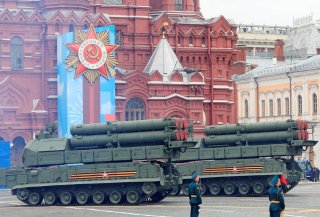 Here's What You Need to Remember: There is apparently a plan to revamp Russia’s ABM capabilities. The system, tentatively called the A-235, will be designed to address shortcomings in the previous generation of Soviet/Russian ABM systems that does not adequately protect against hypersonic missiles.

Can you guess the city best protected from a nuclear missile attack? London? Washington D.C.?

Nope. It’s in Russia — Moscow has an enormous missile shield that may be impenetrable, or totally dysfunctional.

In 1972, the Anti-Ballistic Missile Treaty was signed between the United States and the Soviet Union. Unlike most arms control treaties, the ABMT focused not on offensive weapons, but on the defenses designed to counter those missiles.

The text of the treaty is pretty straightforward.

Essentially, the United States and the Soviet Union were limited to two Anti-ballistic missile systems. These systems could not cover the entire country. The two ABM systems had to be at least 1,300 kilometers (just over 800 miles) apart. Each ABM system could have no more than 100 missile launchers.

Additionally, “Both Parties agreed to limit the qualitative improvement of their ABM technology, e.g., not to develop, test, or deploy ABM launchers capable of launching more than one interceptor missile at a time or modify existing launchers to give them this capability, and systems for rapid reload of launchers are similarly barred. These provisions, the Agreed Statements clarify, also ban interceptor missiles with more than one independently guided warhead.”

The original Soviet ABM system was the A-35, as permitted under the Anti-Ballistic Missile Treaty. As completed, the A-35 had 4 so-called battle stations that ringed the Soviet capital.

Construction of the A-35 began in the 1950s. Early on, the battle stations were armed with the ABM-1 Galosh missile.

The payload was nuclear. Rather than opting for a precision warhead, which could either physically knock an American ICBM out of the air, or get close enough to explode and shoot it down, the Soviet Union opted for an area weapon.

The advantage of a defensive nuclear weapon was that in theory, the ABM would not have to be that close to an American ICBM in order to knock it off trajectory, and knock it out. If all went according to plan, the ACB would explode outside the atmosphere in order to reduce nuclear fallout, when an ICBM is at its highest trajectory point.

Still, the system was not perfect. A 1967 CIA National Intelligence Estimate gamed out Moscow’s defenses. It concluded that Moscow’s ABM ability did not “cover all of the multidirectional U.S. missile threats to Moscow; it is subject to saturation and exhaustion," and that "none of the system components are hardened against nuclear bursts.”

Moscow’s ABM system was upgraded in 1995. The number of missiles (conventional and nuclear-tipped) was expanded, as were the early-warning radar sites that were networked to provide an earlier warning and better accuracy to ABM missiles.

There is apparently a plan to revamp Russia’s ABM capabilities. Namely, to exchange the nuclear payload for conventional explosives, and to rely on mobile launchers, rather than underground missile silos. The system, tentatively called the A-235, will be designed to address shortcomings in the previous generation of Soviet/Russian ABM systems that does not adequately protect against hypersonic missiles.

Given the difficulties Russia experiences in income, it remains to be seen if the A-235 can be realized.