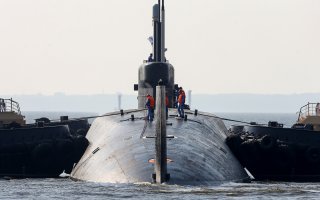 Here's What You Need to Know: Countries with an interest in the Arctic should beware.

Russia’s newest improved Borei-class submarine, the Knyaz Vladimir, was seen in open source satellite photos in June 2020 leaving a Russian naval base at Severodvinsk along Russia’s White Sea where it was built.

What was so unusual about the satellite photographs was the clearly visible wake that trailed behind the Knyaz Vladimir. The wake, over five miles, or about eight kilometers long, could be traced all the way back to the harbor where it entered the White Sea. The naval expert H I Sutton speculated that the long trailing wake was due to a combination of calm surface conditions as the submarine left the harbor, combined with the sub’s large-diameter pumpjet being relatively close to the surface.

According to the Russian Ministry of Defense, the Knyaz Vladimir left Severodvinsk for the White and Barents Seas to do combat training and to test the ship’s systems.

The Knyaz Vladimir is the first of the new-and-improved Borei-II class (alternatively called the Borei-A class or Improved-Borei class depending on the source) and was commissioned during a risky flag-raising ceremony on July 12th in Severodvinsk that ignored social distancing restrictions. The Knyaz Vladimir took nearly eight years to build from when it was first laid down to completion.

The class is also equipped with a pumpjet propulsor, similar to what the American Seawolf- and Virginia-class are equipped with. Pumpjets benefit from greater efficiency at low and sometimes high speeds. A well-designed pumpjet can also be much quieter than a traditional submarine propeller—of crucial importance for secretive underwater operations.

The Borei-II class can pack up to sixteen Bulava nuclear-capable ballistic missiles into its hull, with each individual missile holding six to ten warheads. Each missile has an estimated range of 8,300 kilometers, or over 5,100 miles, which is significantly less than the United Kingdom’s and United States’ Trident D-5 submarine launched ballistic missile, though accuracy is thought to be comparable.

Though the Knyaz Vladimir is currently the only Borei-II class currently in service with the Russian Navy, a total of eight hulls are slated for construction. The Borei-II class is expected to be the backbone of Russia’s sea-going nuclear triad for many years to come.

The Knyaz Vladimir’s commission with Russia’s Northern Fleet is a testament to both the class’ capabilities—and mission. A cleaner, more streamlined hull and sail design combined with a nuclear-powered pumpjet propulsion system mean that the class might be the quietest submarines in Russia’s arsenal.

Placement with the Northern Fleet is a nod to the Arctic’s outsize importance to Russian national interests. As global warming progresses, the Arctic region will become more accessible—easing access to the resource-rich region and potentially creating new maritime trade routes. Countries with an interest in the Arctic beware.