The Savage Mark II is an Impressive Bare-Bones Rifle 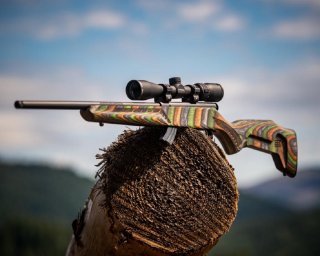 Here's What You Need to Remember: The company’s offerings with this line are anything but minimal.

During its 126 years in operation, Savage Arms, based in Westfield, Massachusetts, has made a name for itself with his popular lever-action rifles, such as the Model 99. At the same time, over the years, it has produced small arms including the Lewis Gun; while during World War II the company manufactured the Thompson submachine gun, the M1919 .30 caliber and M2 .50 caliber Browning machine guns, and even Lee Enfield rifles for the British Army.

Yet in recent years the company has remained true to its sporting firearms roots and produced a series of rimfire rifles including its new Precision Series. This year, the company introduced a new rifle that could redefine the rimfire category.

Introducing the Savage Arms Mark II Minimalist, which features a distinctly different stock design from the original series. This new rimfire combines the classic laminate design of the Minimalist with modern aesthetics that provides a lightweight platform with improved ergonomics and deliver Savage accuracy.

“Minimalist takes Savage rimfire in a new direction,” said Beth Shimanski, director of marketing for Savage. “The laminated stocks are ideal for older youth and adult shooters, yet the rifle weighs only 5.68 pounds. If you’re looking for a new option for plinking or hunting small game, Minimalist delivers.”

The company’s offerings with this line are anything but minimal.

In addition to the Minimalist II, which is chambered in .22LR, the Minimalist is available as the Model 93, which is chambered in .22 WMR, while the Model 93R17 is available in .17 HMR. The .22 LR rifle has a 1:9-inch twist rate and the barrels of .22 WMR and .17 HMR rifles come with a 1:16-inch twist rate. All of the models feature a proven button-rifled barrel with a black matte finish and 1/2x28 threaded muzzles, which are covered by thread protectors.

The rifles feature right-hand actions made of carbon steel, which also feature a black matte finish to match the barrels, along with user-adjustable AccuTrigger that makes for an accurate rimfire. These offer an 18-inch carbon steel barrel while the overall length of the Minimalist rifles is about 45.7 inches.

While light enough to carry all day, the Minimalist isn’t actually light on features but truly takes the rimfire category to the next level. It continues the tradition of Arthur Savage to provide a reliable and rugged firearm at a reasonable price.

All three models of Savage Arms Minimalist Series Rimfire Rifles are available now and have the same MSRP: $359. The most minimalistic thing about the series might just be the price.