Say Hello to the JN-4D ‘Jenny,’ the Backbone of U.S. Postwar Aviation 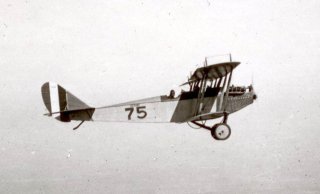 Here's What You Need to Remember: The Jenny was notable for other significant “firsts”—including becoming the first to fly U.S. Air Mail and the first to be used in tests for “plane-to-plane” and “ground-to-plane” communication. After the end of the First World War military aircraft were sold as surplus and the Jenny was popular among the 1920s era “barnstorming” exploits.

Fort Leavenworth, Kansas probably isn’t where you’d likely expect to find any particular noteworthy U.S. military aircraft. The base is arguably most famous—even infamous to some—for being the home to the U.S. Military Corrections Complex, but that is really just one small facet of this Army installation, which actually dates back to 1827. In fact the prison, which does consist of the United States Disciplinary Barracks—the Department of Defense’s only maximum security prison—actually only dates back to 1874.

The base, which is the oldest active U.S. Army post west of Washington, D.C., is located on the spot where explorers Lewis and Clark crossed the Missouri River in 1804 and later Stephen Harriman Long in 1819. While Fort Leavenworth is also home to Sherman Army Airfield it is actually within the complex’s military museum where one can find a truly unique piece of military aviation history.

Today Fort Leavenworth may be as centrally located in the country as possible, but it was once at the edge of the frontier, and home to the impressive Frontier Army Museum. It is here, within the museum’s collection that chronicles the history of the military’s role in the westward expansion of the United States, where one can find an early Curtiss Model J biplane, an aircraft that has earned the nickname “Jenny.”

While the 1909 Wright Military Flyer was actually the world’s first military plane, it was the Curtiss Model J that was the first aircraft to be used in American military excursion when it was flown by the U.S. Army Signal Corps for tactical operations in Mexico against Pancho Villa. The JN-2s used by the First Aero Squadron in operations in Mexico weren’t entirely successful; many were plagued with mechanical problems and poor performance, but the modified JN-3 proved far more effective even if these had a lower ceiling.

It went on to become the first mass-produced American aircraft, and the two-seater was widely used for training by American and Canadian pilots during the First World War.

The JN-4D was the first aircraft used by the United States Marines Corps (USMC). During the United States occupation of Haiti it was used in the first “dive bombing“ attack, when in the summer of 1919 Lieutenant Lawson H. M. Sanderson of the 4th Squadron with his fellow pilots developed a more accurate method to deliver bombs against the enemy “Cacos.” This involved abandoning the hitherto standard procedure of allowing the observer releasing the bomb from a horizontal flight to one where the plane entered a steep dive of 45 degrees, which pointed the nose of the aircraft at the target. During the first dive bombing Sanderson successfully released his bomb from the pilot’s position at an altitude of just 250 feet. This provided more accurate and other members of the squadron adopted this tactic.

The Jenny was notable for other significant “firsts”—including becoming the first to fly U.S. Air Mail and the first to be used in tests for “plane-to-plane” and “ground-to-plane” communication. After the end of the First World War military aircraft were sold as surplus and the Jenny was popular among the 1920s era “barnstorming” exploits.