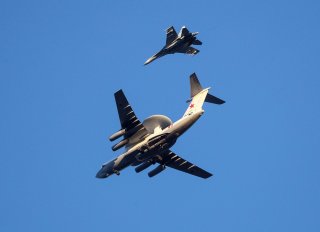 In what is becoming a monthly occurrence, the Russian Ministry of Defense has released cockpit footage of a Su-27 fighter intercepting yet another western aircraft over the Baltic Sea.

The brief clip from last year depicts a Su-27 flying behind, and then zooming past, a US Boeing RC-135 reconnaissance plane. The footage cuts out as the RC-135 seemingly veers off to the right in response to the Su-27’s presence.

The three-decade old Su-27 continues to serve as Russia’s fighter of choice for Baltic patrol missions. Though the original Su-27 variant would struggle in pitched conflict with modern air defense systems and fifth or modernized fourth-generation fighters, its plentiful availability and low maintenance cost makes it an apt choice for low-intensity interceptions against reconnaissance aircraft.

The video was accompanied by a Russian Defense Ministry press release: "Russian means of airspace control detected an air target approaching the State border of the Russian Federation over the neutral waters of the Baltic Sea. A Su-27 fighter jet on duty scrambled to intercept the target. The crew of the Russian fighter approached a safe distance to the air object and identified it as a RS-135 spy airplane of the US Air Force. After it left the Russian air border of Russia, the Su-27 from the air defence duty force returned to the home airfield.”

Mutual Russia-NATO interceptions and escorts have been exceedingly common over the past decade; this is especially true for Baltic airspace, which is the only aerial pathway connecting the Russian mainland with its small, heavily fortified central European enclave of Kaliningrad.

In fact, this altercation closely resembles a 2015 incident in which a Su-27 intercepted another American RC-135U allegedly flying in close proximity to Kaliningrad airspace. The Kremlin argued in 2015 that they had to intercept the RC-135U in question because it was flying with its transponder turned off. The Kremlin does not specify the transponder status of the more recently intercepted RC-135, though their press statement is worded in such a way as to suggest that the Su-27 crew had to visually identify it.

The Kremlin’s NATO envoy previously suggested mutual understanding for all aircraft in the Baltic region to always fly with their transponder on, but that proposal has since fallen by the wayside amid escalating Russia-NATO tensions.

Nonetheless, there is something new about this and other recent Russian interceptions: the Kremlin insists on publicizing them. Until 2014, it was standard Russian practice not to comment at all on these kinds of trivial, routine engagements. But interceptions near Russia’s baltic borders have been politicized over the past several years, with the Kremlin increasingly keen on presenting them as proof of NATO's supposedly aggressive intent.

In the absence of reliable data spanning at least the past decade, it is difficult to separate reality from perception; have Baltic interception scrambles actually risen in the recent years, or are they simply more likely to be reported by governments and covered in the news than they were in the past? There is evidence of a sharp spike in interception activity immediately following Russia’s 2014 annexation of Crimea, but also of a rapid decline by 2015.

NATO’s constituent members, while generally less willing to publicize these engagements than their Russian counterpart, have previously described Russia’s appetite for “high-velocity confrontations” as unsafe, reckless, and dangerous.