To the Scrapyard: The XB-70 Valkyrie Was Shot Down Before It Flew 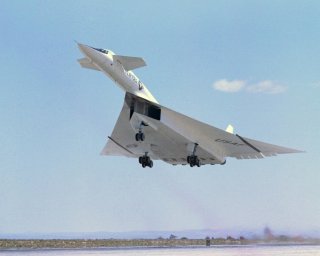 Here’s What You Need to Remember: Seeing the writing on the wall, the Air Force canceled the proposed B-70 line in 1961, three years before the XB-70’s first flight.

During the 1950s, as the Cold War loomed large, both the United States and the Soviet Union made plans to deliver nuclear warheads toward opposing cities. At the same time, work began on their countermeasures to a nuclear attack from the other side.

In the early days of the Cold War, these countermeasures were usually very rudimentary. Flak, or anti-aircraft fire, used extensively during the Second World War, was judged to be useless against jet fighters and bombers. For this reason, both sides came to rely on a more conventional countermeasure—if a nuclear threat approached, planes on either side would be scrambled to shoot it down. Early Soviet MiG fighter jets could easily chase down and destroy America’s World War II-era bombers, prompting work on early supersonic bombers that could leave Soviet fighters behind in the dust.

This notion led to the creation of the XB-70 Valkyrie, a prototype aircraft intended to precede the mass-produced B-70 bomber into production. Two copies of the Valkyrie were made, and both passed their missions with flying colors; each could achieve speeds of up to Mach 3, roughly equal to the legendary Lockheed SR-71; both planes saw their first flight in the same year, 1964.

But the two aircraft had sharply different missions. While the SR-71 was intended as a high-speed reconnaissance aircraft, the Valkyrie was built as a strategic bomber—and this fact helped to doom the Valkyrie while the SR-71 remained operational for decades afterward.

The reason? The Valkyrie was designed as a crewed supersonic strategic bomber that could outrun interceptor fighters, and there is no question that it would have excelled at that task. But through the 1950s, Soviet air defenses pivoted from interceptor fighters to missiles—and, particularly after the Soviets’ successful downing of a U-2 spy plane on May 1, 1960, it became clear that it would be much harder for the Valkyrie to outrun these.

In short, the aircraft had achieved its purpose, but that purpose was outdated before the aircraft’s first piece fell into place.

Seeing the writing on the wall, the Air Force canceled the proposed B-70 line in 1961, three years before the XB-70’s first flight. In the second half of the 1960s, the two prototypes were instead put to use as experimental aircraft, studying aerodynamics and long periods of high-speed flight. One of the two aircraft was destroyed in a mid-air collision in 1966; the other was retired in 1969 and is housed at the National Museum of the U.S. Air Force in Ohio.