In Search of a Clear-Eyed U.S. Strategy on Russia 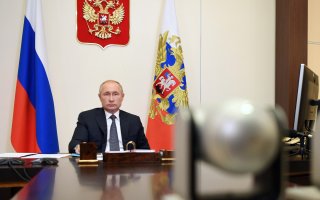 An open letter signed by 103 experts recently called for the US to re-embrace its Cold War strategy for dealing with Russia. It argued that competition should be balanced with diplomacy and identified arenas for US–Russia cooperation: countering nuclear proliferation, protecting the environment and stabilising regional flashpoints. Above all, it advocated combining deterrence with détente.

First, Russia has shown no signs whatsoever of being deterred by US policy. The opposite is true, as demonstrated by its adventurism in Crimea, Ukraine and Syria and its disinformation operations against the West.

Second, the Kremlin has no real interest in long-term détente with the US, mainly because Moscow’s price to assure its security—a privileged zone of influence in the former Soviet space—isn’t something that the US will agree to or be supported by Washington’s NATO allies.

Third, the rules that helped underpin Cold War stability no longer apply. Even if the international system becomes bifurcated again, China, not Russia, will occupy a major pole. Globally, nuclear politics is no longer dominated by the US–Soviet dyad. Nuclear multipolarity is shaping strategic interactions in far more complex ways than Cold War–style deterrence could mitigate. And the technological revolution has been a bonanza for hostile actors seeking to weaponise information, exacerbate divisions and degrade trust in democratic institutions.

The reality is that US–Russia competition is likely to continue for the foreseeable future. That means that another tepid ‘reset’, paying lip-service to Russian insecurities while not actually addressing them, is similarly doomed to failure. But so, too, is symbolic posturing, such as stationing a few thousand troops in Poland and the Baltic states to mask a net drawdown of US forces in Europe. Equally unhelpful are suggestions about recreating the Sino-Soviet split in reverse to prompt Russia to balance against China. Such signals are read in Moscow as proof of Western weakness.

Instead of advocating a Russia policy based on old solutions or half-measures, the US needs a more comprehensive Russia strategy that responds to new strategic, economic and transnational realities.

What might such a strategy look like? To begin with, it would need to move away from a Helsinki-style ‘baskets of competition and cooperation’ approach. Recognising that the US–Russia relationship will be competitive in virtually every field will permit a more comprehensive, proactive and layered strategy, cutting across linked areas instead of viewing them in isolation.

Where the US is strong relative to Russia, it can engage in denial activities. Incorporating conventional and nuclear balancing, as well as promoting geoeconomic and social cohesion, the US should seek to prevent Moscow from engaging in territorial expansionism, creating networks of vulnerable overdependence with itself at the centre or interfering in democratic elections.

The second layer of the US’s Russia strategy should be based on disruption. In the geopolitical and geoeconomic realm, this would include offering realistic investment alternatives in Central Asia and partnering with Nordic countries—and potentially even China—on free and open Arctic trade routes. In the cyber and intelligence domains, disruption includes messaging to Russian citizens on issues the Kremlin finds sensitive: political corruption, nomenklatura and economic and social dislocation.

As the third layer of US strategy, dilution should seek to mitigate Russian influence where Moscow already has an advantage. Two examples might be providing better alternatives to the Nord Stream 2 gas pipeline and taking advantage of Ukraine’s participation in the ‘17+1’ framework of the Belt and Road Initiative. And, while healing America’s tribal divisions seems impossible, renewing and nurturing a sensible political centre would go some way towards inoculating the US against further meddling.

Ironically, China will increasingly have incentives to moderate Russia’s behaviour, including its attempts at territorial expansion, as a Sino-centric Eurasian order begins to take shape. Indeed, China’s gravitational pull in Central Asia, not to mention its investments in the Russian energy sector, give it far more leverage over Russia than the US can muster. It’s plausible, then, that the US and China could find their interests in relation to Russia converging.

A deny–disrupt–dilute strategy will require the US to abandon some of the more pernicious myths clouding its thinking about Russia. That includes the assumption that Moscow can somehow be ‘managed’. Just as for the naive ‘socialisation’ thesis about the liberal order’s ability to blunt Chinese ambitions, the Kremlin has long been awake to efforts to entrap it in Western institutions, especially because entrapment increases the risks to regime stability.

A related myth is that US–Russian relations will change for the better after Russian President Vladimir Putin leaves power. In fact, they’re likely to worsen. While Putin cares little for ideology, he has presided over a generation of politicians and policymakers who have mistrust of the US hardwired into their strategic thinking. And, although Russian elites worry about getting too close to Beijing, they also long ago concluded that the Western order is moribund: that Russia is on history’s winning side.

What does this imply for US strategy? Clearly, it won’t be achievable if Donald Trump is re-elected, but that would make a ‘deterrence and détente’ approach equally implausible. To work effectively, a deny–disrupt–dilute strategy will require Washington to engage more closely with its allies, recommit firmly to NATO and recognise that not all its partners will always feel similarly threatened. It will also have to reach beyond its alliance networks to others with interests in checking Russian ambitions.

This will be healthy for the US. It will go some way towards rebuilding its badly damaged global standing and remind it that persuasion and incentives rather than lazy rhetoric or blunt transactionalism are the key to protecting its national interests. It will demonstrate that Washington remains committed to standards of fairness and order. And ultimately it may make the US itself more resilient, more united and less fractured than the past four chaotic years have left it.