See this Soviet Semi-Automatic Pistol? It Was Born from a Submachine Gun 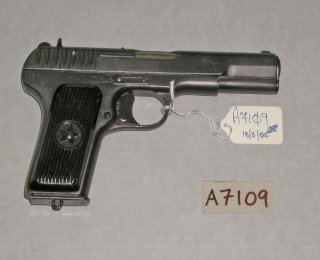 Here's What You Need to Remember: Ultimately, the Tokarev Model 1927 was rejected by Soviet leadership in favor of the PPD submachine gun design.

In an effort to wean the Soviet Union away from a reliance on foreign ammunition calibers and foster self-sufficiency in weapon design, Soviet leadership turned to one of the heavyweight weapon designers: Fedor Tokarev.

Some of Tokarev’s most important weapon designs came to fruition in the 1930s or early 1940s, including the iconic TT pistol and SVT-38 and SVT-40. But before those two influential designs left the drawing board, Tokarev tried his hand at a submachine gun.

Great effort was made to ensure that the Tokarev Model 1927 was simple and inexpensive to manufacture. The Model 1927 was chambered in the widely-available 7.62×38mmR cartridge, a unique and fairly stout pistol cartridge for its time that was originally designed for the Nagant M1895 revolver.

Both the M1895 and the Mosin-Nagant rifle have an identical bore diameter, a commonality that was of benefit to the USSR, as some machine tooling could be used to manufacture both the revolver and the rifle. Had the Model 1927 been accepted into service, the Soviet Union would have had a full-length rifle, submachine gun, and revolver that all featured the same .30 bore diameter, with ammunition commonality between the revolver and submachine gun.

One of the Model 1927’s most prominent features is its forward grip, which also partially houses the magazine for better control during automatic fire by preventing “muzzle rise.” Though rather small, the grip would likely have afforded the Model 1927 good controllability.

Another of the Model 1927’s more unique features was the submachine gun’s trigger group. Two triggers, one for fully automatic fire, and another for semi-automatic shooting were housed within a rather large trigger guard.

The Model 1927’s magazines held 21 rounds, making their capacity rather small. In another interesting design choice, a spare magazine could be stored within the gun’s buttstock, in reserve as a last magazine when necessary.

At least one variant of the Model 1927 exists. In addition to a single trigger, likely for semi-automatic fire only, the variant also has a longer barrel, and a modified rear sight assembly marked to 800 meters, though the 7.62×38mmR cartridge would have been unable to accurately hit even area targets at those ranges.

Before submachine gun trials, the Soviet Army specified that all entrants should be chambered in the more modern 7.62×25mm Tokarev pistol cartridge, necessitating changes to the Model 1927 design. Ultimately the design was rejected by Soviet leadership in favor of the PPD submachine gun design.