See These Missiles? China Could Use them To Destroy U.S. Bases in a War 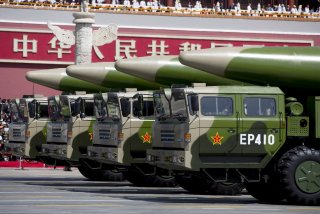 Here's What You Need To Remember: Clearly, the Chinese threat in the Indo-Pacific is both growing and quite serious. Whatever technical and military superiority potentially enjoyed by the U.S. military is, by most estimations, quickly eroding. So the challenge will be to not only bring these emerging systems to fruition, quickly, but also ensure they are built and deployed in sufficient numbers to bring the intended defensive effect.

Is the U.S. military and its assets in the Pacific theater already in jeopardy of rapid destruction by new Chinese weapons systems? Could forward operating U.S. bases in places like Guam, Japan, or the Philippines be hit and rendered ineffective quickly by incoming Chinese ballistic missiles?

One think tank essay by the United States Studies Center seems to think the answer is “yes,” due to insufficient funding, poor readiness and lagging U.S. modernization.

“Many US and allied operating bases in the Indo-Pacific are exposed to possible Chinese missile attack and lack hardened infrastructure. Forward deployed munitions and supplies are not set to wartime requirements and, concerningly, America’s logistics capability has steeply declined,” the essay, titled “Averting Crisis, American Strategy and Collective Defence in the Indo-Pacific,” states.

While the authors of the analysis may be correctly pointing out certain deficits, shortfalls or vulnerabilities regarding base defenses in the Pacific, the study seems to miss several pertinent modernization developments which continue to substantially change the equation regarding the U.S. ability to protect forward installations.

Having benefited from the recent Pacific “pivot,” there are now large amounts of forces and assets in the region, bringing unprecedented levels of military power to the region. Diego-Garcia based B-2s are now flying bomber patrols in the Indo-Pacific, the U.S. Navy bases as much as 60 percent of its global fleet in the region and the Pentagon is now operating several multi-domain, Army-Air Force-Navy cross-functional training teams in the region as well. Often overlooked, the Army has a large presence as well in places such as Japan and Guam. What is lacking in land assets is often compensated for by F-35-armed Theater Security Packages flying and training in the area, multi-national training exercises, dual-carrier attack preparations and a growing sphere of ISR platforms now flying in the Pacific.

The study’s reference to the lack of a “hardened infrastructure” seems somewhat curious as well, given that most current defenses rely upon sensors and interceptors, such as emerging laser weapons, hit-to-kill missile defenses, EW and target-tracking networking systems, as opposed to hardened or fortified “buildings” per say. There is little infrastructure, apart from deeply buried bunkers perhaps, that would be able to withstand an incoming barrage of Chinese ballistic missiles, a circumstance requiring other kinds of defenses intended to operate above ground...before missiles can land.

The reality is two fold; the United States has massively upgraded legacy air defenses in a way that extends ranges, widens the detection envelope with new radars  and brings newer precision intercept technologies. Secondly, the United States is making rapid progress with several emerging missile defense systems expected to emerge in just the next several years. What this means is that, even if the existing state of protections are in some ways deficient, that may well no longer be the case in just the next few years. Defenses are already much different than they were as recently as a year ago, due to emerging EW guidance “jamming” technologies, cyber-hardened networking, multi-frequency 360-degree radar and now-arriving ground-fired laser-interceptors. Land defense command and control is now vastly different than it was a year ago as well.

The Army’s air and missile defense-oriented Integrated Battle Command System recently completed several successful intercepts of maneuvering cruise missiles closing in for attack. The system, to be operational in just the next several years, connects radar and interceptor nodes to one another across otherwise disparate or disconnected areas. This kind of protective envelope naturally brings great relevance to the expansive Pacific theater, known for imposing the “tyranny of distance.”

During several recent Limited User Tests, upgraded Patriot missiles succeeded in tracking and destroying multiple moving targets, bringing a new dimension to Army base protection. While many remember the early Patriots as Gulf War weapons, the weapons now have new guidance systems, warheads, radar applications, range and fire control systems. Being networked with IBCS, furthermore, gives them an ability to find and “hand-off” targets in near real time to other nodes or defensive locations perhaps better positioned to respond. Radar technologies from the Sentinel, Patriot, and Terminal High Altitude Air Defenses are no longer stovepiped or cut off from each other, rather they share a single command and control infrastructure.

What this means is that, for example, a Sentinel radar could track an approaching target traveling through the South China Sea and immediately send targeting trajectory data to a Guam-based Patriot battery. This expedites defenses and of course improves the probability of a successful intercept.

With IBCS, multiple air-defense systems are quickly being networked to one another in a way that expands and connects the needed protective envelope. Multi-domain operations also factor prominently in this equation by virtue of enabling surface ships, drones, fighter jets and land-based radar to coordinate and share information across air, sea and land domains. While much of this is still developing, the Army has already connected IBCS with airborne F-35s able to see approaching attacks from beyond the horizon and pass along threat information quickly.

The United States also has many surveillance assets in places like Guam and throughout the Pacific, platforms engineered to find and pass along suspicious activity, incoming attacks or other items of great relevance to base commanders. AI-enabled algorithms are able to organize video feed data collected from Guam-based Triton drones and instantly alert bases of pertinent, high-threat developments. B-2 bombers and Poseidon sub-hunting aircraft have also operated from Guam and routinely patrolled the Pacific. Aegis-equipped Navy ships patrolling the area can also greatly contribute to Guam defenses by virtue of using long-range radar and SM-3 interceptors to find and take out incoming ballistic missiles potentially en route to striking places like Guam.

The presence of F-35-equipped Navy aircraft carriers and amphibs also impact the equation as the now “arriving” F-35 brings new ability for strike aircraft to find and destroy launch sites, adding yet another layer to U.S. Pacific defenses.

Clearly, the Chinese threat in the Indo-Pacific is both growing and quite serious. Whatever technical and military superiority potentially enjoyed by the U.S. military is, by most estimations, quickly eroding. So the challenge will be to not only bring these emerging systems to fruition, quickly, but also ensure they are built and deployed in sufficient numbers to bring the intended defensive effect.

Therefore while the aforementioned analysis is correct to call for high levels of sustained funding, it appears its assessment of U.S. vulnerabilities in the Pacific might be somewhat exaggerated. The study seems to miss, overlook or underestimate the state of current upgrade defenses and weapons systems now quickly nearing operational status.

Now this is not to suggest that China is not very quickly catching, rivaling or even out-matching the U.S. in several respects, but rather to point out that fast-emerging current technologies are introducing new levels of offensive and defensive military power in the region.

Kris Osborn is defense editor for the National Interest. Osborn previously served at the Pentagon as a Highly Qualified Expert with the Office of the Assistant Secretary of the Army—Acquisition, Logistics & Technology. Osborn has also worked as an anchor and on-air military specialist at national TV networks. He has appeared as a guest military expert on Fox News, MSNBC, The Military Channel, and The History Channel. He also has a Masters Degree in Comparative Literature from Columbia University. This article first appeared last year.