Sexism and Sport: Why Body-baring Team Uniforms Are Bad for Girls and Women 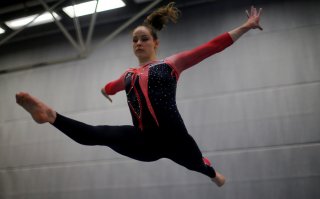 Team outfits and fashion were not supposed to be a big talking point at the 2020 Olympics in Tokyo. But protests over skimpy uniforms by two women’s teams in the months before the games have brought bikinis and high-cut leotards into the spotlight. Now these high-profile campaigns are leaving Olympians, fans and aspiring young athletes wondering: why are women expected to bare their bodies while men cover up?

In April, the German women’s gymnastics team ditched the traditional, high-cut leg-baring leotards for ankle-length unitards, protesting the “sexualisation” of their bodies. This dissent was intended to highlight and prevent sexual abuse in the sport, following recent high-profile cases in the US and UK. They continued their protest at the Tokyo Olympics.

In a similar move, the Norwegian women’s beach handball team were fined for defying the uniform rules at the European championships in July. In Tokyo, they too continued their protest by wearing fitted shorts. The team claimed bikini bottoms made them feel uncomfortable, made it difficult when managing their periods, and turned young athletes off their sport. For many, the last point is key to understanding the impact of sexist uniform policies.

Uniform rules in sport are designed for an idealised western femininity. These standards fail to understand that girls quit sport over body-baring uniforms, overlook different hair and skin types, ignore curvy and muscular body shapes and wilfully ignore the realities of periods. What these policies suggest is that women’s bodies are expected to be perfectly thin, perfectly hairless, able-bodied and period-free.

British runner Jessica Ennis-Hill wrote a heartfelt essay about her fear of exposing herself and how “skimpy kit” can traumatise young athletes. From body shaming to sexualisation, her experience exposes the unseen struggles of girls and women in sport and echoes research on girls in sport.

These campaigns reject sexist norms prevalent in sports and object to women’s uniforms being designed for the “male gaze”, leading to women being judged for their aesthetic appeal alongside their athletic talent.

Undoubtedly, these women are taking a brave and laudable stance. Yet their voices carry an influence that women of colour and advocates for athletes in non-western countries are often denied. With much less fanfare and media attention, they have been lobbying for changes to kit for decades, often on behalf of Muslim athletes and/or people of colour.

In table tennis, a rule change for full-length sportswear and head coverings – as opposed to shorts and T-shirts which leave arms and legs bare – was successfully lobbied to increase participation by Muslim athletes. This victory went largely unnoticed in the west, despite the fact that table tennis is a mainstay of the Olympics. Campaigns led by Muslim athletes led to similar rule changes in basketball and judo, where women were finally allowed to wear head coverings and long-sleeved tops underneath, as their faith required.

In contrast, swimming has rejected proposals to adapt uniforms for Muslim and black athletes, including a ban on “burkinis” and prohibiting use of the “soul cap” swim hat designed for natural black hair.

Athletes with disabilities also face different standards, which was made clear recently when a British Paralympian was criticised by an official  who called her outfit too “revealing”. It was the standard runner’s brief worn by most women.

Who makes the rules?

Modern sport was designed for and by white men. Globally, men are still making most of the rules, including those which police girls’ and women’s bodies. Regulations about uniforms vary by international federation, which is why the Norwegian team faced fines but the Germans did not.

Although the International Olympic Committee (IOC) does not directly control uniform policies, it has advocated fairer rules in its 2018 Gender Equality Review to “ensure competition uniforms reflect the technical requirements of the sport and do not have any unjustifiable differences”. This statement raises the question: what is the justifiable reason for requiring women to wear skimpy uniforms while men can cover up?

What does this mean for athletes and young girls with Olympic dreams? Beyond the general sexualisation of women athletes, there are six identifiable consequences that potentially harm girls and women in sport:

1. Girls drop out of sport – adolescent girls feel too uncomfortable because of unflattering/exposing uniforms.

4. Excluding athletes from non-western cultures – skin-exposing uniforms make it impossible for girls and women from Islamic and other religious communities to compete.

6. Battles over body hair – women and girls are pressured into waxing/shaving bikini lines, legs and any “unfeminine” body hair or risk ridicule and body shaming on social media.

We need more women in leadership

These uniform policies put women under added pressure to conform to western feminine ideals when they should be concentrating on their athleticism. This constricting paradox leaves little room for agency among athletes to challenge traditional, negative conceptions about muscular femininity.

International federations need to adjust technical rules to allow for athletes to choose clothing that suits their performance, personal comfort and cultural preferences. These choices can motivate adolescent girls to remain in sport, support athletes of colour and encourage participation from more conservative cultures.

Recruiting more women from diverse backgrounds to leadership positions in sport is a key step. Broadcasters and marketers should take note – in the same way athletes feel uncomfortable, many women viewers do not enjoy watching sports with objectified bikini-clad players.

Generations of athletes and advocates have struggled to make these changes. More recently, the movement has gathered strength to band together across cultures and sports. The Olympics should be a place for inclusion, cultural exchange and equality. Let’s start dressing the part.

Sarah Zipp is a Lecturer, Faculty of Health Science and Sport, University of Stirling

Sasha Sutherland is a Lecturer in Sport and Event Management, The University of the West Indies, Barbados