Ship-Killer Missiles: The Air Force Has an Ingenious Device To Stop Them 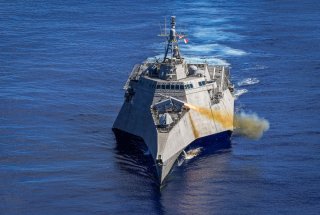 Key Point: Sea-skimming missiles have been the nemesis of surface warships since the 1970s. Weapons such as France’s legendary Exocet, America’s Harpoon or Russia’s Zircon threaten even the most powerful warships with destruction.

Sea-skimmers fly low to avoid radar detection. If warships can’t spot these missiles in time, they can’t shoot them down with point-defense cannons or employ countermeasures such as jamming or decoys.

So, the U.S. Air Force has an idea: send out robot boats to detect sea-skimming missiles and give manned warships time to defend themselves.

The goal is to “identify and demonstrate technologies that can detect and track low radar cross section, high-speed, low-altitude weapons over a large area of water,” according to the Air Force research solicitation. “Tracking on water ranges is limited by the inability of conventional radars to track over-the-horizon.”

These unmanned surface vehicles would be about the size of a rowboat, and the missile-detection sensors would be correspondingly small. “The system would need to be optimized for an unmanned surface vehicle that is approximately 10 feet long and 2 feet wide,” the air force said. “The system must weigh less than 100 pounds and fit within a 6 inch by 12 inch by 12 inch payload box.”

The solicitation doesn’t specify radar as the sensor, though it does mention antenna size, suggesting this will be some kind of active rather than passive detection system. The first phase of the project will be to “determine hardware requirements for the tracking system as well as tracking algorithm, antenna type, and stabilization methods.” The second phase will be to create a prototype.

What’s interesting here is that the solution to detect low-flying missiles isn’t a high-flying aerial platform or even a warship, its radar antennas sitting tall in the water. It’s a small boat sitting low in the water. And the fact that it’s small and unmanned—and therefore much cheaper than a destroyer—raises the possibility of dispatching swarms of radar boats as pickets.

Using robots as sentinels solves another problem. Manned warships have to be careful about emitting radar signals for fear of giving away their position. If a robotic sentinel discloses its position and is sunk, then so what? Another can take its place.

This doesn’t make sea-skimming missiles any less dangerous. Take Norway’s Naval Strike Missile, which has been adopted by the United States. Raytheon, the U.S. co-developer, describes the missile as flying “at low altitudes and close to the ocean surface, emitting signals that are difficult to detect by enemy radars,” and performing “evasive maneuvers designed to counter the most sophisticated defense systems in the world.” And there is Russia’s Zircon, streaking in at Mach 5, so fast that shipboard anti-missile defenses may not be capable of stopping it.

But radar robot boats would give their targets a little more time to prepare.