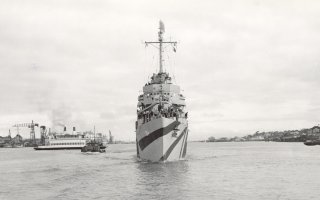 Here's What You Need to Know: About half of the ship’s crew at that time was made up of untested teenagers.

More than 70 years ago, the American destroyer USS Mahan patrolled off Ponson Island in the Philippines when 11 Japanese kamikaze aircraft appeared over the horizon and attacked. The planes, full of fuel and loaded with bombs, could destroy the ship if they came close enough.

But the swarm of attackers was too much, and the destroyer’s crew couldn’t swat them all. Decades later, one survivor recalled the assault and its aftermath, when his ship exploded and the sailors jumped into the sea.

George Pendergast was 18 years old when he joined Mahan’​s crew in April 1944. About half of the ship’s crew at that time was made up of untested teenagers. Pendergast served aboard the ship as a fireman, second class — a low-end position that “required little brainpower but much speed and dexterity,” he told me.

He worked in a three-part engine crew: one sailor each for oil, air and water. These sailors had to work very closely together when hunting a submarine, a process that required the destroyer to run quickly at varying speeds.

“Through a system of communication, the bridge would send down an order for ‘full steam ahead’ — that meant the fireman had to bat open 12 burners, feeding oil into the firebox, as quickly as possible; the man on the air had to feed the air simultaneously for proper combustion; and the water checker had to feed more water into the boiler, or it might go dry and blow,” Pendergast said.

“Now, five minutes later, the next order might be ‘stop,’ which meant all 12 burners had to be batted closed, the air guy had to cut the air, and the water checker had to cut the water, so it would not overflow and kill the fire.”

The steam produced through this process would be fed to the engine room, which controlled the propellers that actually moved the ship.

Pendergast’s position kept him in the often unbearable heat of the fireroom, blind to the world outside. Pendergast stood watches of four hours on and eight or 12 hours off. If he was off watch between 8:00 a.m. and 4:00 p.m., however, he would have to report to the fireroom regardless.

“You might chip paint, do some painting, clean burners and floor plates, or do other menial tasks,” he said. “The Navy made sure you kept busy — no days off!”

Still, when the sailors were off duty, there was little more to do besides sleep, eat, read and write home. Many men took to gambling their salaries, a problem so pervasive that the Navy limited salary dispersal while underway to just $5 every two weeks — at the time, the Navy paid its sailors in cash.

If the ship was in battle, the stress level changed. Being below Mahan‍’​s deck, Pendergast had little clue as to what was going on outside. They were forced to use the tempo and weight of the ship’s armament to compensate.

“The guns told you what was happening,” he told me. “If you heard the five-inch guns booming away, the enemy was still at a distance. When the 40-millimeter anti-aircraft guns started blasting away, they were getting closer. When you’d hear the 20-millimeter guns, you knew it was time to worry.”

Mahan was not a large ship, displacing only 1,500 to 1,800 long tons. Furthermore, she was primarily intended for surface and anti-submarine warfare, and as such was not heavily armed with anti-aircraft weapons. By 1944, wartime refits brought the major weaponry to four five-inch guns, two twin 40-millimeter cannons and four to six 20-millimeter guns.

Exactly three years after the attack on Pearl Harbor, the battle that brought the United States into the war, Mahan faced down the Japanese aircraft off Ponson Island. Despite her crew’s best efforts, three kamikaze planes made it through Mahan‘s defensive fire and struck her.

The kinetic impact of these strikes was magnified by the planes’ fuel. One kamikaze struck the superstructure, housing the bridge staffed by the captain and crewmen at the helm.

I was at my general quarter’s station in the forward fire room when Mahan was rocked by the impact of the three Japanese suicide planes. We knew we’d been hit, of course, but we didn’t know by what. Yet, there was no panic … we were startled but fortunately unhurt. Both boilers remained on line until they were later shut down. It all happened so quickly that many of the details of 7 December 1944 have escaped me. But one detail has stuck with me: the fact that we did not know what was actually taking place topside, which seemingly made that unknown almost as nasty as the event itself.

After receiving the order to abandon ship, Pendergast and his crewmates climbed up to emerge into a world that had changed greatly since they last saw it:

On deck, there was an inferno of fire and explosions; the ship’s superstructure had been reduced to rubble, and the forward magazine was exploding. While trying to get our bearings, the torpedo men were jettisoning Mahan‍ ’​s 12 torpedoes but were hard pressed to avoid hitting the sailors who had gone over the side. Some of us made our way through the debris to the fantail and took turns going over the side into the waters of Ormac Bay; I lost my loosely tied shoes.

Within an hour or so, another destroyer picked up our group. Once we climbed the ladder to the deck of the ship, we were rewarded with a swig of whiskey by a pharmacist mate. The ship remained under attack for most of the day. Later, we were transferred to another ship, and then to several more before reaching Pearl Harbor. There, we were housed in a stockade because we had no IDs except our dog tags. When that was sorted out, we boarded the USS Columbia, a cruiser, bound for Terminal Island, California, arriving two months after the sinking.

Pendergast went on to serve in the much quieter Caribbean and European theaters aboard the destroyer USS Cone from Aug. 18, 1945 until March 21, 1946. He later got a degree and became a government accountant and auditor.

In his mid-80s, he started editing Wikipedia, where he wrote the history of Mahan and the entire Mahan class of destroyers — bringing his shipmates’ war history up to the “level they rightfully earned.”

This post originally appeared at the Wikimedia blog and Wikipedia Signpost. It was edited and shortened for publication on War Is Boring. The text is available under the CC-by-SA 3.0 license.