Ships Are Not Enough: Taiwan Needs Killer Tanks To Stop a Chinese Invasion 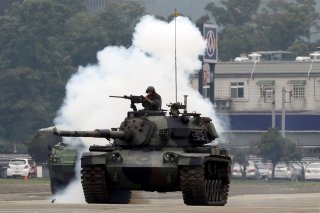 The Trump administration’s plan to sell tanks, missiles and ground-launched air defenses to Taiwan embodies what might be called a strategic paradigm shift to empower the small island’s deterrence posture against an often-threatened Chinese invasion.

While much existing discussion centers upon strengthening Taiwanese air, sea and undersea defenses, there also appears to be an unequivocal need for major land defenses. The existing air-sea emphasis is extremely important, yet there are certainly elements of this approach which invite further discussion about the need to provide Taiwan with a strong, armored ground force as well.

Drawing heavily upon a US Pacific presence along with Asian-theater allied support, a maritime-air Taiwan defense strategy has clearly had a deterrence impact in recent years. Part of this ability to keep a Chinese invasion at bay has naturally hinged upon a strong US posture ensuring defense of the island.

A cursory look at US arms sales to Taiwan in recent decades reveals a maritime strategic emphasis: the US has sold frigates, amphibious ships, harpoons and key air assets such as Chinook and Blackhawk helicopters. While these initiatives are, quite obviously, not useless -- there have been some significant factors that have emerged in recent years which, without question, change the deterrence landscape. Taiwan received some Patriot (PAC-3) air defense missiles during the George W. Bush administration, yet Taiwan has overwhelmingly purchased maritime defenses. They have also received air-to-ground and air-to-air weapons, torpedos, and ship-fired SM-2 missiles.

Simply put, China’s accelerated naval modernization plan continues to alarm many at the Pentagon. The Chinese are not only on a fast track to build indigenous aircraft carriers but also moving quickly on new submarines, amphibs, destroyers, corvettes and other maritime assets, leading many to assess that the Chinese Navy may in fact be passing the US Navy in sheer size. In effect, this means that any kind of Chinese sea-air focused attack could meet with success at great cost to the pro-US nations in the area.

Given this circumstance, it is quite reasonable to observe that, in the event of some kind Chinese attack, Tawainese and allied maritime power alone may not be sufficient. Accordingly, a credible ground force fortified by tanks and air-defense missiles does two clear things: it could very well further deter China by virtue of ensuring a high-casualty ground war and also force China to transit heavy forces across the ocean. That kind of heavy deployment is never easy, and certainly not without major risk of air and sea attack. Both of these factors seem, without question, to further strengthen Taiwan’s deterrence strategy. Even if China believes it would ultimately prevail in a ground invasion against Taiwan, the promise of a credible Taiwanese ground threat does change the equation. This could also decrease the possibility of any needed US intervention. In particular, Javelin anti-tank missiles, TOW missiles and Stinger anti-aircraft weapons would certainly enable a Taiwanese defense force to target Chinese tanks, helicopters, armored vehicles and even drones.

Looking back over the past decade, this history underscores the fact that the current Trump administration posture, as evidenced by the proposed sale, signifies what could be called an ambitious new step in US Pacific strategy.

This first appeared in Warrior Maven here and is being republished due to reader interest.