Should the Air Force Worry About Long-Term Commitment Missile Plans? 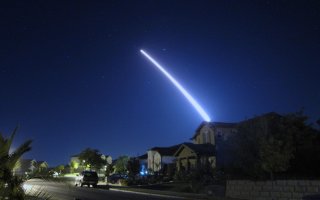 Here's What You Need to Know: Several senior Air Force leaders have expressed growing concern about a potential “missile gap” occurring prior to the arrival of larger numbers of Ground-Based Strategic Deterrent.

The Air Force is planning to operate its newly emerging Ground-Based Strategic Deterrent (GBSD) intercontinental ballistic missile (ICBM) for decades well into the 2080s, with the understanding that technological advances and threat circumstances are likely to evolve substantially in coming years, requiring needed adaptations to the weapons system.

A key area of emphasis for these kinds of technical circumstances, over the course of many years now, is for the military services to upgrade hardware with advanced new software and computer algorithms designed to respond to and incorporate new threats as they emerge.

For instance, adversaries are expected to mature newer kinds of ICBM countermeasures including sensors able to better discern and intercept ICBMs in space. While Air Force leaders make a point not to discuss specific technical elements of GBSD development, for obvious security reasons, senior leaders do talk generally about how weapons developers have successfully employed digital engineering techniques to expedite and refine the development of the weapon.

The GBSD weapons system is, according to Air Force Global Strike Command leader Gen. Timothy Ray, “purpose-built” to “be in the ground for a long time,” referring to various engineering methods designed to enable the weapons to accommodate new technologies over time.

Software upgrades, for instance, can add new guidance systems, reliability technologies and targeting sensors to the weapon as new innovations emerge, an important factor given that the new ICBM is slated to serve for decades and beyond. The possibility for ongoing modernization was intentionally built into early designs of the weapon, due to the use of digital engineering techniques able to replicate technological detail and help establish common computer standards enabling continued upgrades. It would make sense that the weapons were built with a specific mind to ongoing modernization, given that the U.S. Air Force has a long history of upgrading and maintaining ICBMs.

The existing 1960s-era Minuteman III, for example, is already operating decades beyond its intended lifespan. This circumstance, wherein the weapon has been lingering upon the boundaries of obsolescence for many years, has added to the urgency with which the United States is moving to engineer and deploy its new GBSD.

As part of the transition from Minuteman III to GBSD, the Air Force has maintained a high op tempo regarding upgrades to the older platform to make it viable, relevant and functional until the new ICBM arrives at the end of the decade. This has involved several recent tests and shoot-offs of the weapon. For example, upgrades have included reliability improvements as well as ongoing maintenance. Over the years, despite the pressing need for a new generation of ICBMs, the Air Force has pushed to incorporate a large number of upgrades to the Minuteman III, given its age. During one test last Fall, Air Force Global Strike Command fired off a Minuteman III to assess and verify reentry vehicle performance and gather data. Last October, a Minuteman III reentry vehicle traveled more than forty-two hundred miles to the Kwajalein Atoll in the Marshall Islands, according to an Air Force Global Strike statement. What this means is, in many key respects, the Air Force is aggressively pursuing a two-fold trajectory, to include both working to ensure the Minuteman III still functions as a workable deterrent while also fast-tracking and preparing GBSD given the urgency of the need for a new platform.

Several senior Air Force leaders have expressed growing concern about a potential “missile gap” occurring prior to the arrival of larger numbers of GBSD, given the concerning obsolescence of the Minuteman III. This is perhaps why the Air Force is making sure to test and preserve the Minuteman III for at least a few more years to ensure a safe transition to GBSD and make sure potential adversaries understand that the United States has an effective ICBM.