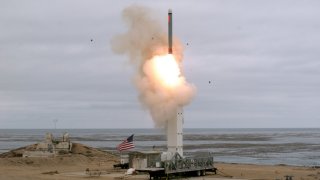 After withdrawing from the Intermediate-Range Nuclear Forces (INF) Treaty in August 2019, President Donald Trump envisioned a comprehensive agreement that controlled all Russian and Chinese nuclear systems, including about 100 Russian and 2,200 Chinese ground-launched, intermediate-range missiles. With the Xi government unwilling to join arms control negotiations, the Trump administration expressed interest in a bilateral deal with Russia. To augment its bargaining position and military capabilities, it secured $181 million to develop conventional intermediate-range missiles.

On the one hand, analysis of the American diplomacy between 1977 and 1987 that produced the INF Treaty suggests that the Biden administration should continue building ground-based, intermediate-range conventional missiles, which will have significant operational value. Developing INF-type missiles would create bargaining chips to trade for Russian and Chinese systems. Deploying intermediate-range missiles abroad would pressure the Putin and Xi governments to engage in serious arms negotiations. Plus, U.S. officials could propose an exchange of apples for apples, simplifying negotiations with Russia and China.

On the other hand, the Biden administration should adopt a realistic approach to arms negotiations. President Trump’s stated objective, rapidly achieving a single accord that controlled all Russian and Chinese nuclear weapons, was a long shot. Unlike contemporary policymakers, Presidents Jimmy Carter and Ronald Reagan confronted a Soviet regime that was about to collapse—and the negotiations still took almost a decade to produce the INF Treaty.

U.S. officials can also emulate tactics that worked for Presidents Carter and Reagan, who limited the INF negotiations to ground-based, intermediate-range missiles. Arms talks with Russia and China will be more manageable if separate forums are created to discuss different classes of weapons. Given President Vladimir Putin’s readiness to talk, U.S. officials could first seek a bilateral deal with Russia. Then, they could pursue a bilateral accord with President Xi Jinping.

Chinese and Russian dual-capable, ground-based ballistic and cruise missiles imperil American and allied security. Protected by Integrated Air Defense Systems (IADS), they can strike American and allied forces and bases throughout Eurasia. American and allied ballistic missile defenses (BMD) can intercept adversary missiles, but they could be overwhelmed and destroyed by a committed salvo. Modern missiles, such as Russia’s Iskander-M (SS-26), can also evade BMD. If two interceptors are assigned to an incoming missile, American BMD will cost three times more than the adversary missiles it could kill.

The Xi government possesses thousands of intermediate-range missiles, which can damage U.S. and allied airfields and naval installations throughout the Western Pacific. For instance, the United States maintains seven airbases within 1,100 kilometers of China. Capable of traveling 4,000 kilometers, the DF-26 covers American forces on Guam. By utilizing radar and satellite imagery to detect vessels 2,000 kilometers from mainland China, Beijing can wreck U.S. and allied ships at sea.

The Putin government is deploying intermediate-range missiles to augment its anti-access/area-denial (A2/AD) capabilities in Kaliningrad, St. Petersburg, and Crimea. For example, SSC-8 ground-launched cruise missiles (GLCMs) can destroy European targets from deep in Russian territory. Road-mobile, shorter-range missiles, such as the Iskander-M, can also strike Western forces from Kaliningrad and Crimea.

As they develop modern missiles, American policymakers need to convince reluctant allies to host the weapons. If allies refuse, they could deploy systems on U.S. territory in Guam or the Northern Mariana Islands. Without concrete plans to station U.S. missiles abroad, those weapons will not produce meaningful leverage during arms talks.

However, the situation is not hopeless for American policymakers, who can glean principles from the experience of negotiating the INF Treaty. First, the Carter and Reagan administrations adopted a dual-track approach to the rapid buildup of Soviet ground-based, intermediate-range missiles. In December 1979, the United States and European allies announced the dual-track decision: it called for the deployment of 572 U.S. missiles in Europe and simultaneous arms negotiations with Moscow. Second, both administrations pursued an achievable objective. Third, U.S. officials confined the talks to ground-launched, intermediate-range missiles. Fourth, they were patient with the stalemate in Geneva. In December 1987, Reagan and General Secretary Mikhail Gorbachev signed the INF Treaty, which banned U.S. and Russian ground-based missiles with maximum ranges of 500 to 5,500 kilometers.

The Biden administration should recognize the dissimilarities between the late Cold War and the 2020s. It will not be negotiating with Gorbachev, who was desperate to save the ailing Soviet system. In addition, today’s intermediate-range missile debate is more complicated. In the 1970s and 1980s, American and Soviet negotiators built upon decades of productive arms control talks. Today, Beijing refuses to sit at the negotiating table—much less embrace constraints on missiles that cost billions of dollars to research, develop, and deploy.

In 2023, the American military aims to field a new generation of ground-based, intermediate-range conventional missiles, which could penetrate Russian and Chinese A2/AD bubbles to strike IADS and time-sensitive targets, including aircraft on runways and missile launchers. For example, the Army's extended-range Precision Strike Missile, the Navy’s ground-launched Tomahawk land-attack cruise missile, and the Navy’s multipurpose Standard Missile-6 (SM-6) will achieve initial operational capability in 2023.

Developing and deploying intermediate-range missiles would allow the Biden administration to propose an exchange of apples for apples. For instance, Precision Strike Missiles could be traded for Russian and Chinese short-range ballistic missiles (SRBMs). Ground-launched Tomahawks could be exchanged for Russian SSC-8s and Chinese cruise missiles. SM-6s could be offered for Chinese medium-range ballistic missiles (MRBMs) and anti-ship missiles.

To overcome allied reluctance on basing, the Biden administration could propose a new dual-track approach. Allied politicians could sell the basing program as a way to generate leverage to reduce the threat posed by adversary missiles. If Moscow and Beijing refuse to negotiate, it will shift the onus of blame for U.S. missile deployments to Russia and China. Then, allied politicians could cite adversary intransigence to marshal support for the basing initiative.

As an opening gambit, U.S. officials can propose a global ceiling on ground-based, intermediate-range missiles. A worldwide ceiling would facilitate future disarmament talks when they could recommend missile reductions. It would also require negotiators to forge consensus about the numbers, types, and capabilities of missiles subject to limitation, an important building block for future talks.

The Biden administration should not anticipate a rapid breakthrough during bilateral negotiations with Russia and China. The INF Treaty was signed in December 1987, four years after American missiles began to arrive in Europe. Given allied reluctance on basing and the complexity of talking with China, securing new agreements may take even longer. The INF Treaty, President Reagan concluded, demonstrated “the rewards of patience.”