Should Pilots Never Remove Their Masks? 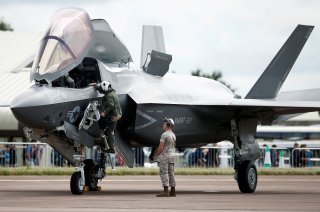 Here’s What You Need to Remember: Pilots will remove their mask several times throughout a flight.

What happens if a fighter pilot takes off their mask? Movies like Independence Day and Top Gun portray it as a final act of desperation that’s strictly against regulation. But is this true? Before we get to the answer, let’s first look at the purpose of the mask.

A fighter pilot’s mask is primarily used to prevent the pilot from getting hypoxic, which is the lack of oxygen to the brain. As part of our training, we’ll go into an altitude chamber where the atmosphere is reduced to one-third of what it is at sea level. The purpose of the training is to recognize our symptoms so that we can take emergency action should we experience it while flying.

For most people, their symptoms start off as tingling in their fingers, followed by light-headedness and mild euphoria. Left unchecked, this can quickly lead to confusion and eventually to losing consciousness, which can be catastrophic in a single seat aircraft. Modern masks also have several additional features to aid the pilot.

Nearly all masks have a microphone built into them. By pushing a button, usually on the throttle, the pilot can communicate across one of the several radios onboard the aircraft.

Some also have a light built into them. Typically, at night we’ll fly with the cockpit as dark as possible, however, when reading a map or writing, we’ll push a button inside the mask with our tongue, activating the light for a short amount of time. The most important innovation, though, has been the ability to smartly regulate the pressure inside the mask.

As altitude increases, breathing becomes more difficult because the pressure inside your lungs no longer has a large differential to the air pressure outside your body. By introducing positive-pressure and forcing air into the pilot’s lungs, this effect can be countered, reducing fatigue on the pilot. Positive pressure also helps us to counter the G-Force we experience during heavy maneuvering.

I weight 210 pounds, 240 with my gear on. If you’ve ever been on a roller coaster that does a loop and pushes your head down, that’s about 3G’s. In a modern fighter, we’ll pull 9G’s. That’s over 2,000 pounds of force crushing me into my seat. It feels like a car is parked on your chest. This can make it extremely difficult to breathe. By forcing air into the pilot’s lungs, modern masks help us breathe under high G for sustained amounts of time.

So, what happens if a pilot takes off their mask? The answer is: It depends. If they are cruising under 25,000 feet, they can fly for a long period of time with their mask down and not feel any effects. We don’t though because a cockpit depressurization could rapidly suck out the air—much faster than an airliner due to how small our cockpit is. Additionally—as anyone who’s visited a high city can attest—it’s easier for fatigue to set in. Above 25,000, though, extended time without a mask will eventually cause hypoxia.

Because dehydration can be equally detrimental as hypoxia in a fighter, most pilots will drop their mask several times throughout a flight to drink water, and for longer missions, to eat. As long as it’s just for a short time, the effects are negligible and actually encouraged by our aerospace physiologists.

Hasard Lee is a fighter pilot currently flying the F-35 Panther, the United States’ newest 5th Generation stealth fighter. Prior to flying the F-35, he flew the F-16 Viper, including 82 combat missions. In his latest role, he was the Chief of F-35 Training Systems, developing innovative techniques to train future fighter pilots. Hasard is a writer and speaker for Sandboxx. He also runs a YouTube channel that receives over 10 million views per month.

This article was originally published on 12/21/2020 by Sandboxx.