Should the United States Establish a Military Base in Australia? 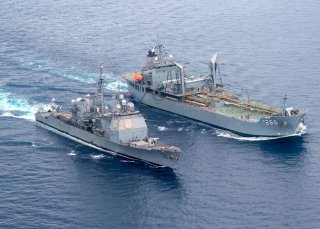 Here's What You Need to Remember: Looking at your map reveals that Australia constitutes prime strategic real estate. Few locations rival it for any power that aspires to primacy in the Pacific and Indian oceans. In other words, the geostrategic imperative for Washington to pool its fortunes with Canberra is real and compelling.

Some ideas are worth broaching even when it’s plain no one will act on them instantly, in whole, or even in part. They make sense even when vagaries of politics or strategy may rule out implementing them. They force people to think—and on occasion, the times catch up with the idea. Case in point: back in 2011 my wingman Toshi Yoshihara and I bruited about the idea of basing U.S. naval forces in Australia. We went big. Under our proposal, an aircraft-carrier expeditionary strike group or another heavy-hitting fleet contingent would call some Australian seaport home.

That would make Oz a U.S. naval hub on par with Japan, where Yokosuka and Sasebo play host to the U.S. Seventh Fleet.

The idea occasioned some buzz in policy circles, and it was more than whimsy. There is a historical precedent. After all, Australia acted as an unsinkable aircraft carrier during the Second World War. It was a staging point floating just outside imperial Japan’s “Southern Resource Area” in the South China Sea. Fremantle, in Western Australia, offered safe haven to U.S. Navy submarines sent forth to raid Japanese mercantile and naval shipping. The ledger of Australian contributions to Allied victory unrolls virtually without bound.

Yet folk in Canberra cast gimlet eyes on our proposal. Australians are redoubtable allies. They also understand that they will have to live with China forever—and that a Communist China that saw Australia take league with the United States against China would be a wrathful China indeed. That prospect gives them pause. Nor was it obvious back then that China would pose a threat of Japanese magnitude. Hence officialdom in Canberra was reluctant to take sides in an incipient rivalry until forced to it. This made prudent strategy for the days when Beijing could wage a charm offensive without provoking snickers.

Since 2011 Beijing has taken to glowering at Pacific neighbors as opposed to carrying on smile diplomacy meant to convince them of Chinese beneficence. It claims waters apportioned to neighboring coastal states as its own, flouts international tribunals that overrule its claims, and deploys a maritime militia embedded within the fishing fleet alongside a muscular coast guard and navy to cow outmatched coastal states into submission. Might, it seems, now makes right for China’s leadership. “Sharp” diplomacy, to use the latest gimmicky phrase, has ousted smile diplomacy from China’s Beijing’s strategic toolkit.

China has come to look like an aggressor on par with Imperial Japan in terms of physical capability if not—yet—malign intent.

At last Beijing may have supplied sufficient incentive for Canberra to set aside its misgivings toward permitting a standing foreign presence on its soil. In fact, it has been doing so by increments for years now. U.S. Marine contingents now regularly rotate through the northerly harbor of Darwin, if on a token scale amounting to some 2,500 troops. Stars & Stripes reports that Australian and American air forces are working together with newfound intimacy. Aviators are integrating stealth aircraft into collaborative endeavors, cooperating on aircraft maintenance, and practicing medical evacuations.

These are workmanlike yet portentous developments. Such efforts pay dividends in peacetime while preparing the allies to fight cohesively in wartime. They bolster “interoperability” not just between allied hardware but between allied tactics, techniques, and procedures. Interoperability, then, is a material and human thing. And from a political standpoint, investing in pricey deployments proves that Washington has skin in the game of great-power strategic competition. Being a trustworthy ally means convincing others you will keep your commitments. That means convincing them you will—and must—share the risks, hazards, and costs inherent in martial enterprises.

Words are fine. Putting your own people, national treasure, military hardware, and reputation in harm’s way lends credence to promises in a way the most dulcet-toned diplomacy never could.

By contrast, those who refuse to share danger are apt to skedaddle when the going gets tough. Or as Nassim Taleb puts it: “Never trust anyone who doesn’t have skin in the game. Without it, fools and crooks will benefit.” Let’s not be fools or crooks. Doubt will linger in allied minds unless they regard American commitments as irrevocable, but U.S. deployments to Oz are skin in the game. Stationing military forces overseas inspires trust. In turn, an unbreakable bond between America and Australia could give China pause the next time it contemplates making mischief.

Capability and cohesion buttress deterrence. So, interoperability is good because it translates into capability, and because capability joined with common purpose transmits a message—disheartening potential foes, giving heart to allies, and helping win over doubters we would like to recruit as allies or coalition partners. Interoperability—a tactical function—has direct political import.

But concentrating on tactics and politics obscures the strategic worth of stationing forces in Australia. As President Franklin Roosevelt enjoined radio listeners on Washington’s Birthday 1942, during the darkest days of World War II: look at your map. Looking at your map reveals that Australia constitutes prime strategic real estate. Few locations rival it for any power that aspires to primacy in the Pacific and Indian oceans. In other words, the geostrategic imperative for Washington to pool its fortunes with Canberra is real and compelling.

Think about it. In recent years strategists of a geographic bent have embraced the notion that the two oceans comprise a unified “Indo-Pacific” theater. The Trump administration wrote its support for this conceit into policy, most prominently by rechristening the U.S. Pacific Command the U.S. Indo-Pacific Command. But the Indo-Pacific force structure is stretched between the theater’s eastern and western extremes—between the Seventh Fleet homeported in Japan and the Fifth Fleet homeported in Bahrain.

Australia occupies a central position midway along the arc between Japan and Bahrain, at the seam between the Pacific Ocean and Indian Ocean where the U.S. presence is thinnest. Forces based there could swing from side to side as circumstances warrant. Australia lies just outside the embattled South China Sea, a major prospective battleground. And it lies mainly out of reach of shore-based Chinese anti-ship weaponry, granting shipping based there relative freedom of movement around the South China Sea rim as well as multiple routes of entry into Southeast Asian waters.

In short, the advantages of basing forces Down Under are legion, the case for doing so increasingly captivating—for both allies. These advantages remained mostly hypothetical in 2011. Today the time has come to expand and deepen the transpacific relationship beyond periodic U.S. Marine deployments and air-force exercises.