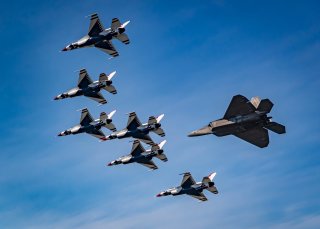 Here's What You Need to Know: American security is not in the least threatened by Iran. Our conventional military alone is profoundly stronger than Iran.

President Donald Trump recently tweeted a direct warning to Iranian gunboats operating in the Persian Gulf, threatening to destroy them if they “harass” U.S. warships again. Less widely reported was an ominous threat issued by Secretary of State Mike Pompeo, who said the Iranian regime should be “held accountable” for conducting their first-ever satellite launch earlier the same day.

The two incidents expose the failure of America’s “maximum pressure” campaign, again illustrating the growing urgency with which Washington needs to develop a new approach in the region to ensure continued American security and prevent us from stumbling into an unnecessary war.

Trump’s tweet referred to a recent incident in which small Iranian gunboats conducted reckless maneuvers near U.S. warships in the international waters of the Persian Gulf. One boat came within 10 yards of the U.S. patrol boat, USCGC Maui.

The biggest question for U.S. policymakers, however, is this: what threat to American national security exists vis-à-vis Iran that justifies policies which risk sparking a new Middle Eastern war? The short answer: there is no threat to our security justifying such risky policies.

Since the 1979 Islamic revolution when Iranian leaders held American diplomats hostage for 444 days, U.S. and Iranian leaders have maintained a constant antipathy for each other. Without question, the government in Tehran has been a menace to the region, supporting regional terrorist groups, and committing atrocities against its own people. The existence of a hated regime, however, does not automatically translate to a security threat to the United States.

That is especially true in regards to Iran, for as much as Washington dislikes the leaders in Tehran, there are many regimes and opposition groups in the region with stronger antipathy towards Iran. And stronger ability to counter.

Saudi Arabia and the UAE are religiously and ethnically antagonistic towards the Shia Persian leaders in Tehran and have been engaged in a covert conflict with them for decades, including the Saudi proxy war that threatens to bankrupt both countries in Yemen. The most powerful military power in the region, Israel, also has an historic antagonistic relationshipwith Iran, and several times over the decades Israel has conducted both overt and covert strikes against Iranian forces or proxies.

Kuwait, Oman, and Qatar are relatively benign towards Iran and Saudi Arabia and employ “strategic hedging” to facilitate regional stability. Both Tehran and Riyadh have to tread carefully with these three oil powers. Taken together, Iran faces significant and sustained resistance from Saudi Arabia, UAE, and Israel, while having to deal carefully with other regional powers.

Critically, Iran has proven in the past four decades they are militarily incapable of dominating even a single foe. They were unable to penetrate more than a few miles into enemy territory after eight long years of their fruitless war with Baghdad and—from the most charitable view—Iranian-backed forces are in a stalemate with Saudi-backed forces in Yemen. If they can’t defeat these weak foes, what possible rationale can be offered that they pose a territorial threat to any regional country?

Iran’s flaccid ability to project power in their own region is greatly constrained; much less could they threaten powerful America. That’s not to say Iran couldn’t cause harm to American interests, however, and that fact illustrates the danger of maintaining maximum pressure on Iran.

The sanctions and other coercive diplomatic means that comprise maximum pressure were alleged to force the Iranian leaders into making a new, better nuclear deal with Trump. They have instead only made Tehran more desperate, less likely to negotiate anything, and more likely to engage in reckless military provocations, including harassing our warships in the region or mining the Strait of Hormuz–neither of which Tehran would contemplate unless they are backed into a corner and threatened with regime change.

American security is not in the least threatened by Iran. Our conventional military alone is profoundly stronger than Iran. Any threat to our security that may materialize from Iran could be neutralized with our ability to project power anywhere in the globe. The time has come to stop treating Iran like some powerful threat they aren’t and adopt a foreign policy that guarantees our security while preserving our ability to prosper as a nation. Needlessly risking war could potentially deprive us of both.