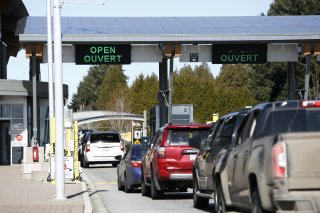 The United States and Canada have long enjoyed a stable relationship. The countries share history, the longest nonmilitarized international border in the world, and strong economic ties.

About 90% of the Canadian population lives within a one-hour drive of the border. More than 2 million people traverse the countries’ 119 border crossings each month.

Part of the largest international megalopolis in the world, what’s called the “Golden Horseshoe” region of New York and Ontarioencircles Lake Ontario and accounts for the greatest number of cross-border shoppers between the two countries.

Key cities in the Golden Horseshoe – Buffalo, Niagara Falls, Hamilton and Toronto – have strong economic connections and account for as much as CAD $10 billion in cross-border retail sales which continues to increase annually.

But the recent closure of the U.S.-Canada border because of the coronavirus underscores a growing divide between the two countries.

In our roles as professors of urban planning and architecture, we have studied the attitudes and policies that unite and divide the U.S. and Canada.

Over the past two centuries, Canada and the United States were closely aligned. The two countries stood shoulder to shoulder during World War II and the Iran hostage crisis (popularized in the film “Argo”).

On Sept. 11, 2001, Canada assisted when U.S. airspace was abruptly closed, by putting a mothballed airport in Gander, Newfoundland, into service. And 10,000 citizens of Gander volunteered to house and feed more than 7,000 inbound passengers who couldn’t get to the U.S. This act of international friendship was celebrated in the popular Broadway musical “Come From Away.”

But differences have begun to emerge between the two countries. Canada was first to legalize same-sex marriage, five years before the United States. The country has a lower drinking age than the U.S. and an open and welcoming immigration policy. The Canadian single-payer national health insurance plan, established in 1984 and available free and universally, reflects a stark difference from the U.S. approach to health insurance.

These changes have placed Canada on a more socially inclusive trajectory than its southern neighbor.

Now, a further difference has emerged: Popular opinion in Canada has soured on the U.S. approach to mitigating the coronavirus.

In response to the coronavirus pandemic, the U.S. closed its border to Canada for the first time since the War of 1812.

Halting leisure traffic and barring entry to noncitizens, the closure impedes consumers who want to cross the border to shop and take advantage of favorable exchange rates, lower prices or greater product selection. The closure also effectively suspends tourism and blocks the daily commute for cross-border workers and property owners, until at least June 21.

The Trump administration announced it planned to deploy military troops to the U.S.-Canada border, too, also a move not seen since 1812. Ultimately, at the urging of the Canadian government, the U.S. relented and did not install troops at the border.

Now, it is Canada that wants to extend the closure until midsummer with increased screening at the border.

These thorny actions mark a shift in the normally friendly relationship between the countries.

Unfriendly behavior between the countries continued to ramp up when U.S.-based 3M corporation recently produced N95 masks for routine export to Canada, but the Trump administration targeted the company and barred exportation of these goods to Canada.

This unusual action appeared to be specifically targeted at 3M and its exports of personal protective equipment.

Responding to the U.S. move, Ontario provincial premier Doug Ford said, “When the cards are down, you see who your friends are.” The action has been roundly decried as unfair and unkindin news reports around the world. And 3M blasted the U.S. government order as a shortsighted one that would have humanitarian implications and possibly spark retaliation from allies.

The divergence has some Canadians calling for forging a more independent path in what has been referred to as the greatest crisis in relations between the two countries since 1945 when a minor trade dispute and disagreements over helping Britain to rebuild followed World War II.

They’re joined in their dismay with the U.S. by other Canadians. Public opinion has shifted on the ground – Canadians now feel anxious about the future direction of the relationship between the two countries.

How Canada does it

The current coronavirus is not Canada’s first encounter with a pandemic.

In 2003 and 2004, Canada was impacted by Severe Acute Respiratory Syndrome. SARS is a cousin virus to the virus responsible for the current COVID-19 pandemic.

The 2003-04 SARS outbreak infected just over 400 and killed 44 people across Canada. Many of the deaths occurred throughout the sprawling Toronto region.

During that initial outbreak, Canada developed test, track and trace procedures and subsequently developed further plans and protocols for responding to pandemic contagion in the future.

The initial SARS epidemic seasoned Canada’s centralized public health defense and disease monitoring to a degree that is more adept at dealing with a pandemic than the decentralized system in the United States.

Consequently, outcomes of the COVID-19 pandemic are notably different in the two countries.

This high infection and death rate in the U.S. is shocking to many Canadians. To express grassroots support for Americans, private business owners and building managers in Canadian border cities like Niagara Falls and Windsor, Ontario, have decorated the windows of tall office towers and hotels with lighted hearts, a symbol of hope.

The lights are not visible to Canadian citizens, but are pointed in the direction of the American border. That one-way message of encouragement provides a symbol of the goodwill that remains in Canada for the U.S. – as well as a reminder of the consequences of different government actions on either side of the border.