Sig Sauer Had a Strategy to Defeat Glock's Guns—Did It Work? 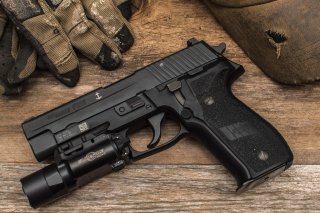 Here's What You Need To Remember: Apart from France, the SP2022 has been a relative commercial failure compared to the P22x series. On Sig Sauer’s website, only two variants of the SP2022 are listed, as opposed to the myriad of variants of P226s and P320s.

As Sig Sauer GmbH in Germany and Sig Sauer, Inc in the United States cleaved themselves from the remnants of the Swiss Schweizer Industrie Gesellschaft (SIG) in the 1990s, both firms needed a new pistol to compete with Glock. Glock’s polymer frame offerings were beginning to dominate the pistol market, and their frames and striker-fired design made them cheaper to produce than the alloy-framed, hammer-fired P22x series.

To counter the Glock, the American and German branches of Sig Sauer would collaborate on a new series of pistols, the Sig Pro. The Sig Pro was to be more affordable, more ergonomic, and cheaper to produce than the P22x series. It would accomplish that through the use of a polymer frame and replaceable polymer grip panels.

The SP2022 is one of the most common pistols in France, as the order of over 270,000 units was the largest French purchase of a handgun following WWII, dwarfing the French military’s order of the PAMAS (a French version of the Beretta 92). Moreover, in police service, the SP2022 replaced the MR 73 revolver, a powerful, yet limited .357 magnum revolver.

By most accounts, the SP2022 has served well in French service. Some policemen have complained about decreased reliability versus Glock and Beretta offerings, but issues with the pistol appear to have been worked out rather rapidly. France has continued to order SP2022s even as the twenty-year mark of service approaches (the 2022 in SP2022), suggesting that they are satisfied with the weapon.

But apart from France, the SP2022 has been a relative commercial failure compared to the P22x series. On Sig Sauer’s website, only two variants of the SP2022 are listed, as opposed to the myriad of variants of P226s and P320s. No variant of the SP2022 is being made with an optics mounting plate, unlike the latest P226s and P320s, suggesting that Sig Sauer is simply maintaining the product line for government contracts, not updating it as it is doing with its other pistols.

Ironically, the SP2022 has outsold the “second gen” Sig Sauer polymer-frame design meant to replace it, the P250, which is no longer shown on the company website. The P250 was Sig Sauer’s first attempt at a modular grip system, with the operating parts contained in a metal “frame” in a plastic grip. However, the heavy double-action trigger of the P250 and limited upgrades over the SP2022 did not make it popular with users. But, the metal frame in plastic grip concept would continue to be utilized in the P320, with success.

This piece first appeared in 2019 and is being reprinted due to reader interest.