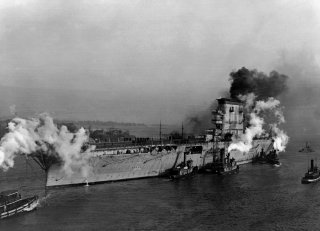 Here's What You Need To Remember: A heavy blow to the Americans, the loss of the Lexington and damage to the Yorktown left the U.S. Navy with only two battle-ready flattops in the Pacific, the Enterprise and Hornet. In terms of tonnage sunk, the Japanese could claim a tactical victory in the Coral Sea, but it was a strategic gain for the Americans. For the first time in six months of Allied setbacks in the Far East, a Japanese advance was turned back. Air strikes against Australia had been prevented.

The USS Saratoga (CV-3) was refitting in San Diego, the USS Enterprise (CV-6) was returning after ferrying fighters to the Marine Corps defense force on Wake Island, the USS Wasp (CV-7) was serving with the Royal Navy Home Fleet in the Mediterranean, the USS Yorktown (CV-5) was at Norfolk, Virginia, and the USS Lexington (CV-2) was carrying a squadron of Vought SB2U Vindicator dive bombers to the tiny Marine garrison on Midway Island.

But the sorely needed planes were not delivered. When word came of the Pearl Harbor attack, the Lexington, still 400 miles southeast of Midway, turned and headed southward. She spent several days with other U.S. ships searching unsuccessfully south of Oahu for the Japanese flattops and returned to Pearl Harbor for refueling and reprovisioning.

Like her sister, the Saratoga, the graceful, 33,000-ton Lexington was originally a battlecruiser converted under a special provision of the 1922 Washington Naval Treaty. She was the fourth U.S. Navy vessel to bear the name of the Revolutionary War battle. At her christening, Rear Admiral William A. Moffett, chief of the Navy’s new Bureau of Aeronautics, prophesied, “This great carrier represents a powerful instrument on the offensive. I am convinced that a bombing attack launched from such carriers, from an unknown point, at an unknown instant, with an unknown objective, cannot be warded off by defensive aircraft based on shore.”

Commissioned on December 14, 1927, the Lady Lex, as she became affectionately known, participated with the Saratoga in her first fleet problem on January 23-27, 1929, when Rear Admiral Joseph M. “Bull” Reeves, the U.S. Battle Fleet’s air commander, demonstrated carrier tactics with a simulated attack against the Panama Canal.

The Lexington was 888 feet long with a massive funnel and a flat starboard-side island towering over her teak flight deck. With turbo-electric drive propulsion, she had a top speed of 35 knots. She once steamed the 2,200 miles from San Pedro, California, to Honolulu in just over 72 hours.

Besides tubs of rapid-fire guns, the carrier mounted a main battery of 8-inch rifles that were later removed as “excess fat” and could accommodate 23 Grumman F4F Wildcat fighters, 36 Douglas SBD Dauntless dive bombers, and a dozen Douglas TBD Devastator torpedo bombers. A taut but “happy” vessel, the Lexington was one of the biggest and fastest warships of her day. She had a basic complement of 2,200 men, whose comfort was ensured with steaks, fresh milk, ice cream, and nightly film shows on the hangar deck. The flattop was commanded in 1930-1932 by naval aviator Ernest J. King, who rose to become the five-star chief of naval operations in World War II.

Her skipper from June 1940 onward was short, stocky Captain Frederick C. “Ted” Sherman of Port Huron, Michigan, a 1910 Annapolis graduate, World War I submarine veteran, and Navy Cross holder. He was a chain smoking disciplinarian whose ability to dock the big vessel without tugboats awed junior officers. Sherman’s pet cocker spaniel, Wags, was a popular “member” of the crew.

By the time World War II broke out in September 1939, the Lexington had established herself as a highly visible vessel in the Navy. Based at San Pedro, she acted as a mother hen to the Battle Fleet in exercises ranging from the Panama Canal Zone to the Aleutian Islands, and she supplied electricity to Tacoma, Washington, for three weeks in the winter of 1930 when the city’s power failed. In July 1937, her aircraft played a key role in the massive two-week search for missing aviatrix Amelia Earhart around tiny Howland Island in the Central Pacific.

“The Pacific Situation is Very Grave”

ing three heavy cruisers, nine destroyers, and the fleet oiler Neosho (AO-23), and sailed southwest for the Marshall Islands to create a diversion covering Task Force 14’s ill-fated attempt to relieve Wake Island. The Lexington was under orders to bomb Jaluit and Wotje, but she returned to Pearl Harbor without having drawn blood.

Besides the Lexington, Admiral Brown’s group was beefed up with the Yorktown, a dozen cruisers, seven of them American, four British, and one Australian, and 16 U.S. destroyers for the next major operation—a February 20, 1942, attack against the big Japanese naval base at Rabaul in New Britain. On the way, the Allied ships were spotted by three enemy flying boats. Brown called off the raid, but the biggest air battle yet seen in the Pacific raged as land-based Japanese Nakajima B5N Kate and Mitsubishi G4M Betty bombers zeroed in on Task Force 11. The Americans retaliated, and the ships’ antiaircraft fire, Wildcats, and Dauntlesses annihilated many of the raiders.

When 18 Japanese planes pounced on the Lexington, 27-year-old Lieutenant (j.g.) Edward H. “Butch” O’Hare of Lt. Cmdr. John S. Thach’s Fighting Squadron 3 went into action for the first time. A natural marksman in the tradition of Davy Crockett and Sergeant Alvin C. York, the husky, dark-haired 1937 Annapolis graduate coolly shot down five Betty bombers in four minutes. Credited with saving the Lexington, O’Hare—the Navy’s first air ace of the war—received a double promotion and was eventually awarded the Medal of Honor, Navy Cross, and two Distinguished Flying Crosses. When workers at the Grumman Aircraft Corp. plant in Bethpage, New York, learned of his initial feat, they sent him 5,000 cigarettes.

Despite their valiant efforts, the Allies were in a dire predicament in the Far East during the early months of 1942. President Franklin D. Roosevelt signaled to British Prime Minister Winston Churchill on March 9, “The Pacific situation is very grave.” It was no exaggeration. Japanese forces had seized Wake, Guam, and many smaller islands; overwhelmed the British bases at Singapore and Hong Kong; sunk the Royal Navy’s battleship HMS Prince of Wales and battlecruiser HMS Repulse, and attacked Malaya, the Philippines, the Dutch East Indies, the Gilbert Islands, Shanghai, Borneo, and Burma.

The swift eradication of scant Allied air power followed by relentless ground thrusts ensured the enemy conquests, and by May 20, 1942, about 20 million square miles of territory would be added to the Japanese Empire. As Admiral Isoroku Yamamoto, shrewd commander of the Combined Fleet, had predicted, the Japanese had “run wild” and were gripped by “the victory disease.” At the Imperial General Headquarters in Tokyo, euphoria fueled what Britain’s Captain Basil Liddell Hart later termed “strategic overstretch.” Still further aggression was charted, including an amphibious assault on Port Moresby on the western coast of New Guinea, after an overland offensive had been turned back by tough Australian troops. Subsequent attacks along the northern shore of Australia were planned.

Yamamoto, who had maintained tight security before the Pearl Harbor attack, was now so confident that he was sending orders by radio, contrary to sound military practice. But the Americans were listening in, thanks to Commander Joseph J. Rochefort and his small team of brilliant cryptanalysts toiling in their basement plotting room, Station Hypo, beneath the 14th Naval District headquarters in Pearl Harbor. They had cracked the Japanese JN25 code, and by mid-April 1942, Rochefort was able to alert Admiral Chester W. Nimitz, commander of the Pacific Fleet, to the planned enemy offensive. It was expected to start around May 3, with landings likely in New Guinea, New Britain, and the Solomon Islands.

The news presented a dilemma for the able, silver-haired Nimitz. His Hornet (CV-8) and Enterprisecarrier task groups were 2,000 miles to the west with Vice Admiral William F. “Bull” Halsey, preparing to launch Lt. Col. James H. Doolittle’s 16 North American B-25 Mitchell medium bombers against Japan on April 18. The USS Saratoga was still refitting after being hit by a Japanese torpedo, and Nimitz was left with only two flattops to counter the enemy thrust.