Six Highlights From the Trump-Biden Debate 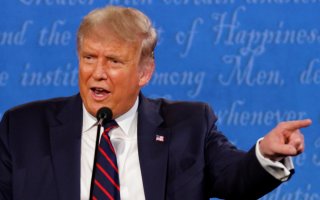 Here’s six matters the two discussed in the debate, which was moderated by Fox News anchor Chris Wallace.

Biden suggested it’s not a concern.

He added, referring to Trump, “This is all about trying to dissuade people from voting because he’s trying to scare people into thinking that it’s not going to be legitimate.”

The former vice president stressed that he would accept the results either way.

Trump warned of fraud, bringing up numerous examples of primaries earlier this year where mail-in balloting was a problem. Trump made a distinction between absentee ballots–or what he called solicited ballots–and mass mail-in ballots.

“As far as the ballots are concerned, it’s a disaster. A solicited ballot is OK. You’re asking. They send it, you send it back. I did that,” Trump said. “They are sending millions of unsolicited ballots across the country. There is fraud. They found them in creeks. They found some with the name Trump in a wastepaper basket. They are being sent all over the place. They sent two in a Democrat area. This is going to be fraud like you’ve never seen.”

As for the final results, Trump said, “I am urging my supporters to go into the polls and watch very carefully.” He said if it’s a fair election, “I am 100% on board.”

Trump argued that “forest management” was key to preventing the wildfires scouring California.

“You need forest management … the forest floors are loaded up with trees, dead trees that are years old and they’re like tinder, and leaves and everything else— you drop a cigarette in there, and the whole forest burns down. You’ve got to have forest management,” Trump said.

Asked by Wallace if human pollution and greenhouse gas emissions were contributing to global warming, Trump said, “To an extent, yes.”

Biden spoke of weatherizing buildings, and increased use of electric-powered vehicles. “We can get to net zero in terms of energy production by 2035,” the former vice president said, adding that millions of jobs would be created.

He also attributed the dramatic weather in recent years to climate change, saying:

We spend billions of dollars now … on floods, hurricanes, rising seas. We’re in real trouble. Look what’s happened just in the Midwest with these storms that come through and wipe out  entire sections and counties in Iowa. They didn’t happen before. They’re because of global warming. We make up 15% of the world’s problem … but the rest of the world, we got to get them to come along. That’s why we have to get back into … the Paris Accord.

If the United States had stayed in the Paris Agreement, an international treaty, the nation would have had to make significant strides in reducing greenhouse gas emissions,

Trump asserted that Biden would back socialized medicine.

“Your party wants to go socialist medicine,” the president said.

Biden responded that his Democratic primary opponents attacked him for not supporting a Medicare for All plan.

“The platform of the Democratic Party is what I, in fact, approved of,” Biden said.

Wallace suggested Trump had no plan to replace Obamacare.

“Of course I have,” Trump responded. “We got rid of the individual mandate.”

Biden said that voters should “have a right” to determine who fills the Supreme Court seat vacated after the death of Justice Ruth Bader Ginsburg.

“We should wait and see what the outcome of this election is,” the former vice president said, adding, “It’s just not appropriate to do this before the election.”

He did make it clear that it wasn’t personal.

“She seems like a very fine person, but she has written before she went on the bench that she thinks that the Affordable Care Act is not constitutional,” Biden said, referring to Amy Coney Barrett, who currently serves as a judge on the U.S. Court of Appeals for the 7th Circuit.

When asked about the appropriateness of appointing Barrett to serve on the Supreme Court before the election, Trump stated, “Elections have consequences.”

Trump also said of Barrett, “She is going to be as good as anybody that has served on that court.”

Some Democrats have called for ending the filibuster and filling the Supreme Court with additional liberal justices, if Democrats win the presidency and the Senate.

Wallace asked Biden, “Are you willing to tell the American people tonight whether or not you will support ending the filibuster or packing the court?”

Biden said he wasn’t going to answer the question.

“Whatever position I take on that, that will become the issue,” Biden said. “The American people should speak. You should go out and vote. … Vote and let your senators know how you feel about this. I’m not going to answer the question because the question is …”

Trump kept interrupting before Biden finished his point about why he wouldn’t answer.

Wallace asked the two candidates to address race, and asked Trump about his executive order to stop Critical Race Theory training in the federal government. The theory promotes the belief that a person is automatically advantaged or disadvantaged based on race.

“I ended it because it’s racist. I ended it because a lot of people were being asked to do things that were absolutely insane,” Trump said, adding, “It was a radical revolution taking place in our military, in our schools, all over the place. You know it and so does everybody else.”

Biden claimed Trump has walked away from the goal of equity.

“He’s the racist,” Biden said of Trump. “The fact is there is racial insensitivity. People need to be made aware of what other people feel like, what insults them, what is demeaning to them. It’s important to them to know. Many people don’t want to hurt other people’s feelings. It makes a gigantic difference in how a child is able to grow up and have a sense of self esteem.”

Trump talked about the riots in numerous cities across the country.

“The people of this country want and demand law and order and you’re afraid to even say it,” Trump said.

When Trump pressed him, Biden said he was for law and order.

However, later Biden said, “Antifa is an idea, not an organization.”

Fred Lucas is chief national affairs correspondent for The Daily Signal and co-host of "The Right Side of History" podcast. Lucas is also the author of "Abuse of Power: Inside The Three-Year Campaign to Impeach Donald Trump."