Sixth-Generation Fighters Have an Ace Up Their Sleeve 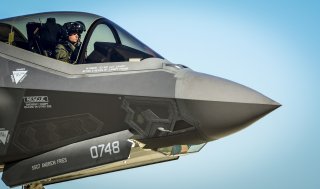 Here's What You Need to Remember: An artificial intelligence (AI)-informed information processing, enabled by accelerated real-time analytics, could allow human decisionmakers to draw upon otherwise limitless pools of data.

Could there be so many disparate streams of data that a pilot could become simply overwhelmed by the sheer volume of information?

Perhaps much of the information is useful and of great operational value, yet could there be some circumstances wherein it might simply be too vast and cannot be organized fast-enough to actually help inform decision making amid time-sensitive combat operations?

After all, ground command centers, drones, fighter jets, satellites, Navy ships and even armored ground combat vehicles will all be able to generate large amounts of information of potential relevance to an extremely capable sixth-generation aircraft. The sheer volume of data might likely be sufficient to drown a pilot in information. Also, that information might not be used fast enough to have an impact. Perhaps small pieces of extremely relevant and time-sensitive data could be buried beneath an avalanche of less impactful information? This could simply clutter, complicate or even derail any kind of pilot decisionmaking process.

However, an artificial intelligence (AI)-informed information processing, enabled by accelerated real-time analytics, could allow human decisionmakers to draw upon otherwise limitless pools of data. Algorithms can integrate new information, instantly compare it against vast amounts of stored data, and come to informed conclusions without requiring human intervention. The ultimate value is not found in the sheer amount of information but the speed with which it is organized, analyzed and transmitted to human decisionmakers.

“Next-generation multifunction systems will produce orders of magnitude more data than previous systems. Multifunction systems onboard the platform will be combined with onboard data coming from various resources such as space vehicles satellites and wingmen both piloted and optionally piloted creating a very dense data environment,” Jason “Tex” Clark, Director for Advanced Mission Systems, Raytheon Intelligence & Space, said during a Raytheon webinar event on sixth-generation aircraft.

Often referred to as easing the “cognitive burden,” AI and iterations of man-machine interface, can perform time-consuming or otherwise impossible information-analysis tasks, all while a human being functions as the ultimate decisionmaker in a command and control role. While AI is quickly advancing toward being able to discern and organize seemingly subjective information, there are many decision-making abilities and problem-solving faculties regarded as unique to human cognition. This may be part of why many futurists and weapons developers envision the optimal approach to involve a carefully balanced mixture between human and machine attributes to simultaneously leverage and integrate the best of each.