Sleek And Beautiful, The Navy’s Littoral Combat Ship Started Off As A Failure 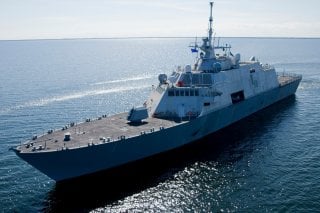 These are waters that make headlines, including the Mediterranean Sea, Persian Gulf, and the seas shoreward of Asia’s first island chain. Hughes was a great proponent of dispersing sensors, firepower, and command-and-control among as many platforms as possible. A fragmented navy task force might lose an individual unit in action, but it would lose just a small percentage of its aggregate combat power. Heaping multi-mission capability onto a single hull like a cruiser or destroyer, by contrast, risks forfeiting all of that capability in a single firefight with the enemy. Declares the tactics sage: in an age when hostile naval capability resides in large part in shore-based aircraft and missiles, and in small seagoing craft, it’s better for the U.S. Navy “to fight fire with fire, using expendable, missile-carrying aircraft or small surface craft” of its own to prosecute the fight for littoral access. It’s “taboo” to send capital ships into contested near-shore expanses.

Hughes lauds the LCS precisely because it sports the capacity to operate in company with a family of unmanned surface, aerial, or subsurface vehicles, as well as with fellow manned ships. Commanders can fan out capability among many nodes while retaining the ability to concentrate firepower at points of impact, employing “network-optional” communications to obscure the force’s whereabouts. Was the LCS his implement of choice for inshore combat? No. It was too big and obtrusive for his taste. He favored coastal corvettes. Around the turn of the century Hughes formulated the “Streetfighter” concept, which would have fielded surface craft far lighter than the LCS’s 3,000-odd tons. Streetfighter vessels would have displaced about 1,000 tons, making them affordable in swarms. But since the U.S. Navy opted for frigate-sized littoral combat ships, Hughes was determined to make use of them. Which is a praiseworthy attitude.

A couple of points in closing. One, the setting matters. How much and what the LCS can contribute depends on whether a likely field of combat lies in the Persian Gulf, the Black Sea, or the South China Sea. Operations must be tailored to the theater; this is Strategy 101. And two, it’s wrong and misleading to fixate on the technical characteristics of individual ships, warplanes, or ordnance, as military folk have a habit of doing. A fleet is an organism whose elements must interact with and mutually reinforce one another to achieve victory at sea. The goal of strategy is to amass superior firepower at decisive places and times. The force as a whole, not a single component of it, is what concentrates strength for action. It is the proper focal point and unit of measure for tacticians. Finding ways a littoral combat ship, its aircraft, and its unmanned vehicles can help the fleet win the fight for access to marginal seas is the task before surface-warfare commanders. If they do, the program can shed its taint of failure.

There’s no escaping the fact that, in many ways, the LCS program is an example of how not to conceive of, experiment with, and field naval combatants. But take it from the ghost of Wayne Hughes: with a little ingenuity we may yet wrest a measure of success from catastrophe.