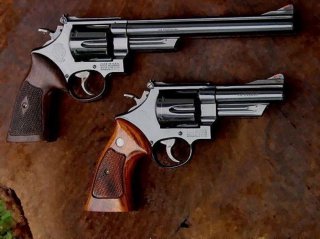 Here's What You Need To Remember: Blued with reddish brown grips and a large, hoodlike ejector housing, the Model 29 has classic look that few other guns do. While not an ideal anti-personnel weapon for anyone but the likes of “Dirty Harry,” the .44 Magnum handgun does fill a niche, satisfying gun enthusiasts, hunters and fictional police detectives alike.

This first appeared in December.