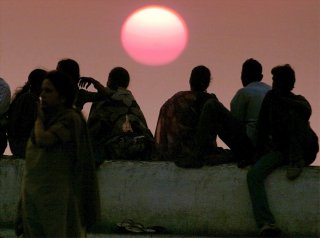 The Swedish Space Corporation recently cancelled a field test of a high altitude balloon, intended to better understand solar geoengineering techniques that might be used to cool the Earth.

The proposed experiment, led by researchers at Harvard University and opposed by the Saami Council (an Indigenous organization) and Swedish environmental groups, was benign in terms of its potential impacts. Rather the opposition was over a more general concern about solar geoengineering itself, the implications of its deployment and the moral hazard that it presents by detracting from global efforts to address climate change through emissions reduction.

This leaves solar geoengineering research in a kind of limbo. There are concerns over its potential environmental and socio-political impacts, but there’s also hostility towards resolving some of these uncertainties through scientific research.

Aware of the need to find a way through this morass, the U.S. National Academies of Sciences released a report in March that recommended the U.S. government invest up to $200 million over five years into solar geoengineering research to understand its risks and benefits. This report is significant not only because it signals a mainstreaming of the debate on solar geoengineering research, but also because of its thoughtful and balanced approach to a subject that has been fraught with controversies, such as the cancellation of the SCoPEx experiment.

Canadian climate policy has yet to address solar geoengineering, but the government acknowledges the need to understand the implications of these hypothesized technologies. In developing its own approach to solar geoengineering research, the Canadian government would do well to heed the key takeaways from the National Academies of Sciences report.

The reality beyond pop-culture

Solar geoengineering covers a variety of Earth-cooling strategies, such as adding reflective particles to the upper atmosphere or manipulating clouds in the lower atmosphere. If successful, these techniques would reduce the amount of sunlight that reaches the Earth’s surface and warms the planet.

Solar geoengineering raises profoundly difficult governance issues due to its potential to impact large-scale human support systems such water availability, agriculture and energy on global scales. That said, solar geoengineering is unlikely to resemble its dystopian portrayal in movies and television.

Solar geoengineering is at best a complement to, not a substitute for, emissions reduction. This is not a political statement, but reflects the inability of solar geoengineering to address key climate impacts, such as ocean acidification, caused by the ocean’s increased absorption of carbon dioxide.

Solar geoengineering may temporarily lower or moderate the Earth’s temperature, but it’s unable to return the Earth’s climate to some prior state. Limiting changes in temperature and precipitation patterns requires limiting carbon dioxide emissions, and likely removing past emissions from the atmosphere.

Despite its limitations, solar geoengineering could help moderate the most extreme temperature changes and provide governments, private enterprise, and civil society more time to mitigate emissions, remove carbon dioxide from the atmosphere and adapt to new climatic conditions. Yet the report points out that we simply do not know enough to determine whether solar geoengineering would be safe, effective and acceptable. A focused and co-ordinated program of research would address these uncertainties.

Conducting research on solar geoengineering is neither neutral nor risk free. There are well-founded concerns that research could divert attention, resources and political will away from mitigation efforts. It could create political momentum and powerful constituencies that favour its deployment. But failing to do research also brings the risk of making uninformed decisions in the future.

Research on solar geoengineering should not be undertaken at the expense of decarbonization efforts and should include clear “exit ramps” — predetermined criteria, such as low efficacy or unacceptable risks — for terminating research activities. Although those risks remain unclear, some research has suggested weather patterns might change, which could have impacts on things ranging from agriculture to biodiversity. Research activities should be directed towards addressing knowledge gaps, but should not be directed towards developing or deploying solar geoengineering.

Because the decision-making environment surrounding solar geoengineering research is characterized by deep divisions (conspiracy theories abound in this field) within both expert and lay communities, considerable attention must be paid to governance of research. The research must ensure transparency — of research funding, methods and outcomes — be subject to robust oversight by governments, scientific institutions and scientists themselves, and proactively inform and engage the public.

Public trust in the motivations of scientists and credibility of outcomes will be crucial to ensuring that future debates on solar geoengineering proceed on the basis of publicly accepted science. Failure to address these issues could result in a unilateral deployment where one nation state or even possibly a private company could deploy geoengineering technologies. Without global involvement and collaborative governance, possible negative side effects might be ignored or intentionally distributed to benefit those who initiate it.

This requires a research program that engages social scientists and humanists, as well as natural scientists. As intervening in the climate would have global implications, questions of consent and unequal impacts (economic, environmental and social) are raised not just in Canada, but internationally.

Canada can, and should, bring important perspectives to research on solar geoengineering. As a middle power, with a credible emissions reduction plan and a long-standing commitment to international scientific cooperation, Canada is well positioned to be an honest broker in international debates on solar geoengineering research and its potential role in addressing climate change.

Given its global nature, solar geoengineering requires international governance. Canada, which has always supported multilateralism over American exceptionalism, can play a crucial role in steering this discussion towards key international institutions.

As the SCoPEx controversy illustrates, bringing Indigenous voices and traditional knowledge systems to bear on solar geoengineering research questions is a moral and legal imperative that Canada can lead, on given the constitutional requirements for consultation in Canada, as well as Canada’s embrace, albeit hesitant, of the United Nations Declaration on the Rights of Indigenous Peoples.

Recognizing the need to research solar geoengineering is an acknowledgement of a broader policy failure to address climate change. A clear-eyed response to this failure requires Canada to redouble its efforts to reduce emissions, and not place false hope in unproven technological fixes. But the urgency of the current climate emergency also necessitates the responsible exploration of all options that may contribute to a more liveable planet.

Burgess Langshaw Power is a PhD Student, Global Governance program at the Balsillie School for International Affairs, University of Waterloo

Juan Moreno-Cruz is the Canada Research Chair in Energy Transitions, University of Waterloo

Neil Craik is a Professor, University of Waterloo