Some Say the World Will End In Fire Other Ice, a Third Group Says it Will End When the U.S. and China Go to War 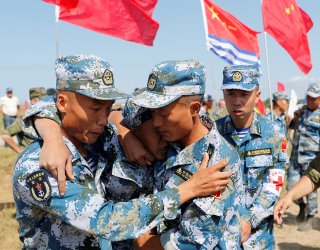 Here's What You Need to Know: China and the United States will likely remain fixated on each other as potential military competitors for decades to come—but if relations are prudently managed, they won’t have to become actual adversaries in a war. The two countries’ respective capabilities, however, will play a role in how their global influence is perceived.

Operationally, the PLA and U.S. military have very different needs. The U.S. is geographically isolated from its foes and instead depends on a massive network of overseas bases on six continents to engage or contain adversaries. This requires globe-spanning logistical capabilities including hundreds of transport planes, aerial refueling tankers to keep jet fighters and transports aloft, and amphibious transports and carriers to convey Marine units. Just as importantly, strong diplomatic alliances are necessary to maintain those overseas bases and keep them supplied with fuel, personnel, and munitions. For example, U.S. operations in Asia are heavily dependent on alliances with South Korea, Japan, Singapore, the Philippines, and more recently, India. Several of these Asian countries, as well as western and central Europe, also rely upon U.S. military forces to meet their security needs.

China is only beginning to acquire such logistics and is situated in a very crowded neighborhood surrounded by potential military competitors such as India, Russia, and Japan. (Personally, this author does not believe contemporary Japan will become an aggressive military power anytime soon, but the Chinese don't see it that way due to their bitter memories of the Japanese invasion.) Additionally, Beijing has only a few military alliances with Pakistan, North Korea, and a few Southeast Asian nations. But, China is slowly developing multi-national institutions such as the Shanghai Cooperation Organization and its aspirational Silk Road project in hopes of fostering stronger ties.

China is also expanding its capacities for longer-range expeditionary operations befitting its status as a superpower—particularly in Africa, where Chinese companies maintain a dominant and ever-growing presence. Beijing's non-interference and no-questions-asked approach to human rights and corruption issues have won it many friendly governments on the African continent.

Despite all of this, the United States military still has vastly more recent combat experience, particularly in joint operations coordinating multiple services. The PLA’s last major armed conflict was a not very successful punitive invasion of Vietnam in 1979. Today, the PLA is only beginning to implement a more joint-operations-oriented doctrine while struggling to overcome the traditional parochialism of the military hierarchy, which occupies a prestigious place in its society.