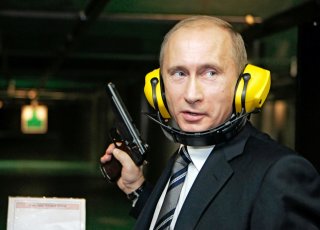 Here's What You Need To Remember: If effort and investment are applied to the Chinese and Russian handgun programs, the next generation is likely to be better, incorporating lessons learned from the current pistols.

Making a successful pistol design is hard. Unlike rifles where most moving parts are relatively spaced out, pistols have all their moving parts packed into a small area. The modern trend of trying to stuff more and more ammunition into smaller and smaller guns only exacerbates the difficulty of making a quality design that works right.

Russia and China have found this out the hard way, having pushed fresh designs into production only for them to fall short in reliability, ergonomic and endurance metrics relative to Western designs.

Let’s look at some pistol designs from these countries and examine what might have caused these issues.

Russia’s Pistolet Yarygina (PYa), otherwise known as the MP-443 or Grach, is a design that has suffered a multitude of issues.

This came as a surprise to some military watchers, as the Soviet Union and Russia are known for producing the reliable Kalashnikov rifle and machine gun, and the prior Makarov and Tokarev pistol designs were known for their reliability.

But there’s a lot more going on in the Yarygina compared to the Makarov and Tokarev.

The Makarov is a straight blowback design with no locking going on between the slide and the frame. The Tokarev uses locking, but it only has a single stack magazine and lacks any real safety apart from the half-cock.

In comparison, the Yarygina attempts to incorporate features that are standard in most western pistols: the 9x19mm round, a 15+ round double-stack magazine, and lever frame safety. All those features were requested by Russian operators for many years.

But the resulting pistol didn’t match western designs in reliability and endurance. Early models had poor fit and finish, though those flaws were more a function of the generally poor manufacturing standards of the Russian arms industry during the 1990s.

The real flaws in the design are in the reliability and endurance. The pistol is quoted as being rated for a service life of 4000 rounds, which is far less than that of a Beretta, H&K, Glock or SIG. Early variants of the pistol also suffered significant reliability issues, being unable to make it through a magazine and generally having issues with feeding and cycling.

These issues are probably a result of relative inexperience with the metallurgy and design of the magazine and feed ramps for the pistol. The low endurance figure is possibly a result of the designer’s unfamiliarity with the 9x19mm round.

The Yarygina was one of the first pistols in that caliber designed in the Russian Federation, so the designers were probably relatively unfamiliar with how the pressure affected the working parts of the pistol. In contrast, the caliber has been used in the west for almost a century by the time the Yarygina was designed.

Some of these reliability flaws can be attributed to the spotty quality of more advanced ammunition types used in the Yarygina. Generally, the reliability issues have been ironed out since the pistol saw more widespread adoption in the 2010s. However, it’s uncertain if the pistol’s endurance figure has significantly improved.

Regardless, the Yarygina is considered to be an outdated design by modern standards. It lacks a light rail and uses the double-action/single-action trigger system when striker-fired triggers are more in vogue.

Kalashnikov Concern is now working on the new Lebedev pistol, which appears to address a lot of common ergonomic complaints about the Yarygina and uses a striker.

China is suffering similar issues with its primary military and police pistol, the QBZ-92. While information on the domestic variants is scarce, we can extrapolate from the technical specifications given for the export variants of this pistol, the CF-98.

The problems with this pistol are the same as those on the Yarygina: low endurance and reliability. The official website for the exporter lists the service life of the pistol at 8000 rounds. Other sites list the service life as “more than 3000 rounds.” This is unacceptably low for a service pistol.

In the U.S. Army’s Modular Handgun System trials, the endurance test alone clocks in at 35,000 rounds, four times the service life of the CF-98. Some have suggested that the short service life simply applies to the barrel of the pistol, but even then, the figure is rather low by modern standards. H&K pistol barrels are rated for around 20,000 rounds.

A large portion of it is probably inexperience. China’s industry designed their first pistol in 1964, a simple blowback design similar to the Walther PP or Soviet Makarov (itself, an almost-clone of the Walther). The QBZ-92 is their first adopted clean slate design since.

Similar to the Yarygina, the QBZ-92 was the first adopted attempt at a modern locking-breech pistol by Chinese industry.

As expected from inexperienced designers, the design appears to be half-baked in many other aspects. The reliability of the pistol appears to be worse than western analogues, with Chinese sites reporting a failure rate of 0.2 percent or 2 rounds out of 1000 fired.

This would be unacceptable by western standards. The standard for the MHS project is 1 round per every 2000 fired. The latest group of Beretta M9 pistols averaged 1 round per ~19000 fired.

From a “shootability” perspective, the CF89 is also immature compared to western designs. A review of an exported CF-89 describes the trigger to be worse than American and European designs.

Overall, while current standard issue Chinese and Russian handgun designs are markedly inferior to those in the West, the underlying technology behind pistols has been the same for over fifty years. The poor qualities of the designs are due to a lack of practical engineering and design experience.

If effort and investment are applied to the Chinese and Russian handgun programs, the next generation is likely to be better, incorporating lessons learned from the current pistols.

Charlie Gao studied political and computer science at Grinnell College and is a frequent commentator on defense and national security issues. This article first appeared two years ago.