Is The South China Sea Big Enough For Both China And America? 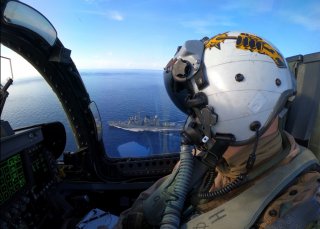 Here's What You Need To Remember: In terms of pure statistics, increasing the number of patrols, surveillance operations and attack drills near one another simply raises the probability of some kind of hostile encounter. The big question is this: would either major power exercise the much-needed restraint necessary to stop a war in the event of small engagement?

Could a small “clash,” incident, or brief exchange of fire between American and Chinese forces in the South China Sea quickly lead to a dangerous “all-out war?”

Speaking to this topic, the Chinese-government backed Global Times heated up the rhetoric a bit when stating, “if Washington launches military provocations to challenge the bottom line of China’s national security and sovereignty, China will make immediate and effective retaliations.”

However, some kind of intercept, false move or misinterpreted training exercise could easily spark some kind of exchange of fire. Both the America and China have been massively ratcheting up surveillance plane operations, aircraft carrier attack drills, training operations and bomber patrols in close proximity to one another. This increases the likelihood of actions being misunderstood or intentions being misread.

Perhaps Chinese fighter jets and surveillance drones operating near or over Taiwan might appear to be closing in for an attack, therefore prompting ground commanders to fire air defenses? Where is the boundary between peaceful training operations, harmless patrols and severe military provocation? Should that line be tenuous in any way, major catastrophic war could erupt.

Kris Osborn is the new Defense Editor for the National Interest. Osborn previously served at the Pentagon as a Highly Qualified Expert with the Office of the Assistant Secretary of the Army—Acquisition, Logistics & Technology. Osborn has also worked as an anchor and on-air military specialist at national TV networks. He has appeared as a guest military expert on Fox News, MSNBC, The Military Channel, and The History Channel. He also has a Masters Degree in Comparative Literature from Columbia University. This article first appeared earlier this year,