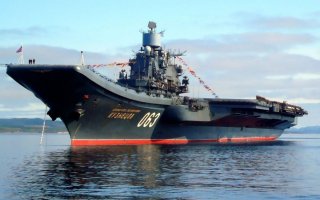 Here's What You Need To Remember: It was extremely difficult to dissuade the Kremlin from its nuclear carrier dreams.

Late into the Cold War, the Soviet military hatched a wildly ambitious scheme to become a blue-water Navy. The 1991 collapse closed that chapter in Soviet military history, but Russia’s lingering maritime ambitions remain.

In the late 1960s, the Soviet shipbuilding industry began to develop its first nuclear-powered aircraft cruiser. Project 1160 Orel (“Eagle”) was a nuclear-powered supercarrier with a displacement of around 80,000 tons. Orel would have featured steam catapults, carrying as many as seventy aircraft. In line with the Soviet concept of a “heavy aviation cruiser,” the proposed supercarrier would have differed from its western counterparts with a robust onboard arsenal of sixteen P-700 Granit anti-ship cruise missiles. By the early 1970s, the project was abandoned due to cost concerns and succeeded by the smaller and much less ambitious Kiev class of conventionally powered carriers.

But the Kremlin would not be dissuaded from its nuclear carrier dreams. The design experience from Project 1160 figured prominently into a new, mid-1980s supercarrier project: the infamous Ulyanovsk.

But all of this begs a central question: Why would the Soviet Union need an aircraft carrier in the first place? As a predominantly maritime power, the US relies on Carrier Strike Groups (CSG’s) as one of its core power projection tools. By contrast, the USSR, like its Russian Imperial predecessor, is a land power that depended on its ground forces to secure its vast Eurasian frontiers. But there are some relevant factors specific to the Cold War competition. As previously argued by US Naval War College Professor James R. Holmes, the USSR sought carrier fleets in order to create a “blue belt of defense”—a kind of offshore buffer working in tandem with local land and air defenses to deter NATO CSG incursions deeper into Soviet waters. The Soviet Navy could also use aircraft fleets to secure patrol areas for its strategic submarines, a crucial leg in the Soviet nuclear triad. Then there is the question of international prestige: the Cold War arms race was as much about appearances as it was about concrete capabilities, and the Soviet security establishment did not want to visibly lag behind its western counterpart in a core criterion of naval power.

The Ulyanovsk supercarrier was nothing if not an exercise in gratuitous one-upmanship, boasting a dizzying array of advanced features. The ship was to be powered by four KN-3 nuclear reactors, boasting a speed of up to 30 knots and supporting a massive crew of 3,400 sailors. At a displacement of 85,000 tons and length of more than 300 meters, the Ulyanovsk could carry up to seventy compatible aircraft: primarily, a mix of Su-33 and MiG-29K fighters. The carrier also boasted an impressive complement of weaponry, including P-700 missiles and onboard surface-to-air missile systems.

The Ulyanovsk was a grandiose project that, if completed and successfully commissioned, would have grown Soviet maritime power projection capabilities by leaps and bounds. But it was not to be: by the time of the 1991 Soviet collapse, the Ulyanovsk was only about 40 percent completed. With the Russian Navy struggling to maintain its vast Soviet inheritance throughout the 1990s, Moscow simply lacked the necessary funding and supply chains to continue with its supercarrier project. The Ulyanovsk was scrapped by the end of 1992, but Russia’s nuclear carrier ambitions have outlived the Soviet collapse. According to recent reports, the Kremlin is mulling a proposal for a new, 100,000-ton nuclear-powered carrier called Project 23000E “Shtorm.” As of the time of writing, there is no indication that the project has been adopted.