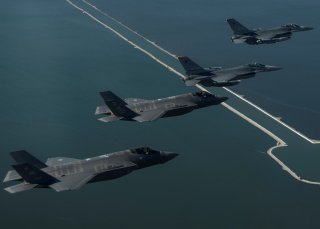 Winning a dogfight might take speed. Escaping one almost always does.

While American F-86 Sabre fighter pilots racked up a kill-to-loss ratio of 10:1 in the Korean war, American dogfighting performance, due largely to assumptions about how combat had changed, diminished dramatically in Vietnam. In the first half of the Vietnam war, American pilots could manage an average of only 2 kills for every U.S. fighter downed. Those losses directly led to the formation of the U.S. Navy Strike Fighter Tactics Instructor Program that most of us know today as Top Gun, where a renewed emphasis was placed on dogfighting tactics.

Now, after another multi-decade lull in air combat, America’s aviation corps is once again certain about the future of the fight, but history begs that we hedge those bets. Ward Carroll recently published a YouTube video called “Dogfighting 101” wherein he argues that dogfighting may be absent in today’s combat environment, but it’ll come back in a hurry if a near-peer conflict were to unfold. I’ll set the video to start at that portion, but it’s really worth watching Carroll’s analysis in full.

If you aren’t able to give the video a watch, here’s what Carroll had to say about dogfighting being dead:

“I’m going to submit that dogfighting is not dead, because if you’ve ever been in a major exercise, not to mention, an air-to-air war like Desert Storm, then you know that, in the heat of battle, there’s confusion, there’s all kinds of chaos, and ultimately a bandit is going to sneak through and you’ll find yourself basically engaged one-on-one with the bad guys in an old school kind of way.”

Carroll doesn’t argue that American fighters are going to go looking for a chance to get up close and personal with China’s thrust-vectoring, stealth J-20B like some imagine when they picture dogfights. Instead, he reasonably expects that in a large force-on-force situation, the chaos of warfare is going to create the circumstances for these kinds of one-on-one engagements to occur.

Carroll’s argument seems to hold true when you look at the breakdown of the early days of the air war of Desert Storm. The Coalition Forces brought a massive amount of airpower to bear over Iraq in those first days of the conflict, but despite the sheer volume of airframes in the fight, a number of small dogfights broke out and, had there not been plenty of support in the area, many more could have.

You can see exactly what Carroll predicts in this breakdown from The Operations Room. The value of speed and maneuverability when within visual range is also evident in the video. Once again, I’ll start the video at the pertinent point, but it’s worth watching this in its entirety:

What does all this have to do with speed? It’s certainly of use in a dogfight, but speed is also extremely important when it comes to getting out of a dogfight. Even the most advanced stealth platforms aren’t invisible, and if an F-35 found itself squaring off with a J-20B in a one-on-one situation, it’s feasible that the Chinese fighter could have the advantage through surprise or the roll of the combat dice.

In either regard, it would be in the F-35 pilot’s best interest to bug out and get away from that fight, or at least, to create enough separation to gain an advantage he or she could then press in turn. Unfortunately, the F-35 wouldn’t be fast enough to escape a J-20 if a pilot tried, so he or she would just be giving the Chinese jet a perfect opportunity. What’s worse is that, at this range, the F-35’s opponent wouldn’t even have to be a stealth aircraft itself.

“We have multi-axis missiles now where I can shoot you behind my three-nine line [behind my aircraft]. Okay, but once you Winchester, meaning run out of those weapons, and you’re now in the visual arena, then none of your [stealth] defensives are working. And now you have an airplane that can barely go supersonic. So, welcome to getting shot down.”

When we’re talking about fighters squaring off with one another, stealth is extremely valuable, but in a large-scale fight with hundreds of jets in the area, speed clearly counts too.

How do you build a force that balances cost, speed, and technology?

The Air Force purchasing new F-15EXs isn’t going to solve this problem. Not only do these new fighters cost around as much as an F-35 to build (despite offering significantly more service life), the new (old) fighters the Air Force receives are already slated to replace existing F-15s that are aging out of service. While they do offer greater capability than their predecessors, each jet can still only be in one place at a time.

“We’ve got to refresh the F-15C fleet because I can’t afford to not have that capacity to do the job and the missions,” now-retired General David Goldfein said in 2019.

“That’s what this is all about. If we’re refreshing the F-15C fleet, as we’re building up the F-35 fleet, this is not about any kind of a trade.”

SOCOM’s Armed Overwatch program promises to alleviate some of this need by fielding a small and inexpensive aircraft that can provide ISR (Intelligence, Surveillance, and Reconnaissance) and direct air support to special operators. These planes are expected to operate from austere airfields with support from a very small group of maintainers. Effectively, SOCOM wants a simple aircraft that can live with the troops in the vein of the OV-10 Bronco of Vietnam fame, but with advanced ISR capabilities usually only found in technological marvels that need airstrips and facilities to operate. It’s a tall order, but fielding such an aircraft would make the sorts of special operations skirmishes that are sure to litter the coming decades far more survivable.

Despite America’s massive military budget, resource and asset scarcity remains an ongoing challenge. The MQ-9 Reaper, for instance, is the most highly requested air asset among ground commanders in Iraq and Afghanistan, but with only 280 of these remotely piloted aircraft to go around, the Air Force will have to choose between continuing to support the full breadth of combat operations in the Middle East or transitioning platforms to the Pacific where a more potent deterrent maritime force is increasingly necessary.

The truth is, even after the United States withdraws from Afghanistan, the U.S. military can’t completely withdraw from the Middle East and will likely need to place a larger emphasis on Africa moving forward. There are only so many air platforms to go around, especially at modern fighter jet prices of around $100 million per aircraft. In effect, America is going to be stuck fighting its old wars for some time, while adding new conflicts and new tensions elsewhere around the globe. In order to do it all, America needs more platforms without increasing defense spending in a massive way.

That may be feasible through attritable programs like Kratos XQ-58 Valkyrie. The Valkyrie is a low-observable UCAV (unmanned combat aerial vehicle) capable of carrying two small diameter bombs and covering more than 2,000 miles before refueling. What makes the Valkyrie special isn’t its payload or range capabilities though, it’s the cost. At just $2-3 million per airframe, the XQ-58 costs only slightly more than a single Tomahawk cruise missile.

The Valkyrie lacks the speed that would be necessary to cover the vast distances between units that we can expect in Africa and the Middle East in the coming years, with a top end of around 650 miles per hour (Mach 0.85), but the attritable premise coupled with more power could prove to be just what the doctor ordered. Valkyries have already been launched from stationary platforms using rockets, which would mean that these types of drones could be deployed from places that don’t even have airstrips, and they’re cheap enough that losing a few in a fight won’t give a commander pause.

As for the high-end fight, America’s forthcoming NGAD program, under development with both the U.S. Air Force and U.S. Navy, is expected to produce a family of systems that can effectively counter the most advanced fighters on the planet like the J-20B or SU-57 without breaking a sweat. This platform will hopefully incorporate a return to emphasizing speed as well as stealth, with fuel range serving as yet another essential facet of military aviation America needs to address.

It’s going to take new platforms to counter the full spectrum of threats nations like China pose in the 21st century, and these planes can’t take decades to go from the drawing board to production as the F-35 has. In many places, they won’t need to be stealth, nor is there a requirement for a human on board, but one thing they will need to overcome the tyranny of distance and protect American lives is speed.