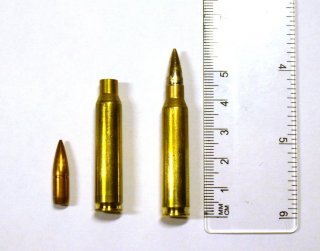 But while the Marines adopted the PMAG in 2016, they still resisted the change to the Army’s M855A1 round. The Marines originally planned to adopt the M855A1 in 2009, when the Army was finalizing its design work on the round, but problems with the accuracy of the trajectory of the round caused the Marines to pull out of that commitment. Instead, they bought the Mk318.

As time went on, the cost of the M855A1 dropped as the Army bought more rounds while the cost of the Mk318 remained relatively constant. The disparity in cost and the strain on logistics caused Congress to demand to know why the Marines didn’t standardize on the Army’s M855A1 round in 2015.

The reason for the Marines resistance was their M27 Infantry Automatic Rifle, a version of the Heckler and Koch (H&K) HK416. This wasn’t the first time the German rifle caused problems for the Marines. The IAR led the Marines to ban use of earlier generations of PMAGs in 2012 because the rifle wouldn’t function reliably with the magazines. This was because the IAR’s magwell was outside of standard M16 dimensions. The dimensions were derived from the British L85, which H&K worked on during the HK416’s development.

The ban was rescinded after a joint service trial revealed that PMAGs were the best magazines for their M16s and M4s. The trial also lead to the eventual adoption of the Generation 3 PMAG by the Marines, which is compatible with the IAR.

The IAR’s non-standard dimensions and internals also lead to problems with the M855A1 round. Marine Corps Brigadier General Joseph Shrader testified in front of Congress in the summer of 2017 that the M855A1 caused durability and reliability issues in the IAR. Congress evidently didn’t care, as the National Defense Authorization Act for 2017 forced the services to adopt the same 5.56mm round by 2018. The Marines adopted the M855A1 on December 2017.

The HK416 series of rifles are known to be overgassed to maintain reliability. This causes them to have a violent recoil impulse and undergo faster parts wear compared to a M4/M16. When paired with the increased pressure of the M855A1 round, it’s likely that the bolt of an IAR is going to wear out far faster than their M4 or M16 counterparts.

This problem can mitigated by an adjustable gas port which was introduced on the HK416A5. However, the USMC’s IAR does not have this feature, so it’s likely that the service has just decided to live with the reduced parts life that comes with the M855A1.

But where does this leave other nations? The United States has developed a standard third-generation 5.56mm round in the M855A1, but most of the rest of NATO still uses M855/SS109. But some countries have begun to develop their own third generation rounds.

The UK has fielded a round that maximizes penetration in the L31A1, which features a full steel penetrator/core wrapped in a copper jacket. It’s unlikely that this round matches the M855A1 in terminal ballistics, as most performance testing has shown just increased performance versus steel.

Thales Australia is building what looks to be M855A1 clone in their F9 round to be used with Australia’s new F90 assault rifle. While there is not much public information on the round, a blurb in Defense Technology Review mentions the round has “enhanced lethality,” and shows a picture of the round, which has an exposed steel penetrator like the M855A1.

The round is reportedly in use with the Australian Defense Forces and New Zealand Defense Forces (NZDF) in 2019. The NZDF uses M4-style rifles with PMAGs, a combination that would definitely be compatible with an M855A1-style round.

Most other nations seem to be sticking with SS109-style projectiles, along with the questionable lethality that entails. Perhaps they are waiting for the next generation of infantry weapons, such as the U.S. Army’s 6.8mm Next Generation Squad Weapon project. But for armies actively engaged in combat, it might be worth looking at adopting a version of the M855A1 and a magazine to go along with it.

Charlie Gao studied Political and Computer Science at Grinnell College and is a frequent commentator on defense and national security issues. This article first appeared in October 2019.