Star Trek Shows Us How the U.S. Navy Can Defeat China 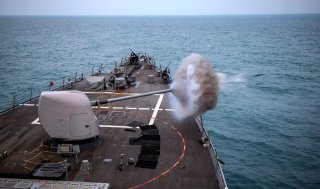 Here's What You Need to Remember: China’s navy, in short, could ape the Cylons’ strategy. In purely martial terms, posing missile, gun, and torpedo threats from many points of the compass from as many domains as possible—from the surface, the depths, and aloft—would compel a ship’s beleaguered defenders to cope with more challenges, perhaps, than they could manage.