Stealth Destroyer Power: Check Out Everything the Zumwalt Can Do 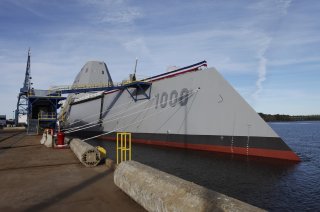 Here's What You Need To Remember: The Navy had been planning to have the gun fire a Long-Range Land Attack Projectile, but is now exploring different ammunition options for, among other things, cost issues, Navy leaders said.

Kris Osborn previously served at the Pentagon as a Highly Qualified Expert with the Office of the Assistant Secretary of the Army - Acquisition, Logistics & Technology. Osborn has also been an anchor and on-air military analyst for national TV networks.This first appeared in Warrior Maven here several years ago. It is being republished due to reader interest.