Stealth Wanted: Why the F-15EX Is a Loser 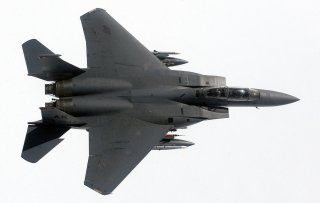 Here's What You Need to Remember: Part of the rationale for F-35 superiority is based upon the notion that it is designed to find and kill multiple enemy aircraft, and air defenses, before it is itself is even seen. Could this be possible for a non-stealthy F-15EX Eagle II? Most likely not in a comparable way.

The new upgraded F-15EX multirole strike fighter introduces a sphere of next-generation types of technical applications to include: advanced electronic warfare, active electronically scanned array radar, ultra-high-speed computer processing, and possibly hypersonic weapons as well as a number of additional adaptations intended to support future combat operations. That all seems pretty impressive, however, while considered a massively upgraded fourth-generation aircraft balancing itself on an interesting boundary between fourth-and-fifth-generation aircraft, the F-15EX strike fighter is of course much less stealthy than full fifth-generation platforms such as the F-22 Raptor and F-35 Lightning II.

While proponents of the F-15 Eagle argue that there are a number of not-yet-seen innovations built into the F-15EX strike fighter, which would make it useful in major power warfare, the lack of stealth and other attributes unique to fifth-generation aircraft might seem to suggest otherwise.

The 1980s-era F-15 aircraft is an entirely different jet than it was decades ago. Elements of the airframe structure are fundamentally unchanged from its beginning decades ago, however, the F-15EX strike aircraft may very well fire hypersonic weapons, hit speeds of Mach 2.5, bring new generations of radar and electronic warfare, and operate computer processors able to perform eighty-seven billion functions per second.

Several years ago, the F-15 aircraft was integrated with the fastest jet-computing processor in the world, called the Advanced Display Core Processor which, Boeing innovators have explained, performs eighty-seven billion computing functions per second.

No Stealth Is the Problem

Does all of this mean that an F-15EX strike aircraft could successfully compensate for a lack of stealth with these kinds of weapons guidance technologies, much longer attack ranges, increased sensor sensitivity and fidelity, high-speed computing, and threat warning detection? Is there any way the advanced F-15EX could actually compete with a Chinese J-20 or Russian Su-57? It would not seem so based on an initial cursory examination, yet the answer likely pertains to a host of differently interpreted variables.

For instance, if an F-15EX strike aircraft had long-range sensors, varied guidance systems, advanced computing, threat library identification data, and vastly improved weapons reach, could it destroy enemy air defenses or fifth-generation platforms without having to engage itself in close proximity? Should an F-15EX strike aircraft operate with the sensing, artificial-intelligence-enabled computing, threat identification, and radar technology along with long-range weapons guidance systems in any way comparable to existing fifth-generation aircraft, then some might argue for deploying the F-15EX in a major power warfare scenario.

However, stealth, maneuverability, artificial-intelligence-enabled sensor fusion, and other attributes of an F-35 jet seem to present things an F-15EX strike aircraft simply cannot parallel.  Also, the F-15EX strike aircraft is likely vastly inferior to an F-35 jet in terms of stealth, computing, data analysis, and sensor integration, reasons why it simply would not seem to make sense to reduce the F-35 fleet in favor of adding more less-capable, yet equally expensive F-15EX airplanes.

Part of the rationale for F-35 superiority is based upon the notion that it is designed to find and kill multiple enemy aircraft, and air defenses, before it is itself is even seen. Could this be possible for a non-stealthy F-15EX Eagle II? Most likely not in a comparable way given that stealth is considered by many to be an indispensable attribute when it comes to countering advanced air defenses and operating in extremely high-threat environments.

Not Built for a Great Power War

Regardless of its upgrades and sphere of attributes, an F-15EX strike aircraft would most likely have a lot of trouble in any kind of great power engagement. This circumstance might lead some to question the rationale for its existence, particularly given that its cost is comparable to, if not greater than, an F-35 jet in terms of a price per plane. Is there truly a place for an up-gunned, upgraded fourth-generation plane in today’s threat environment containing Russian and Chinese fifth-generation fighters? Air dominance against enemy aircraft and air defenses, while of course heavily reliant upon sensor range and fidelity, also requires an ability to maneuver and elude approaching enemy aircraft, something a non-stealthy plane like an F-15 jet is likely to struggle with.

Kris Osborn is the defense editor for the National Interest. Osborn previously served at the Pentagon as a Highly Qualified Expert with the Office of the Assistant Secretary of the Army—Acquisition, Logistics & Technology. Osborn has also worked as an anchor and on-air military specialist at national TV networks. He has appeared as a guest military expert on Fox News, MSNBC, The Military Channel, and The History Channel. He also has a Master’s Degree in Comparative Literature from Columbia University. This article is being republished due to reader interest.