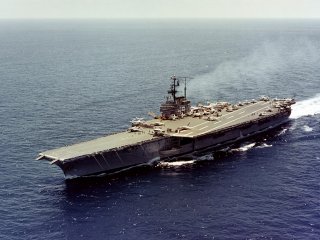 Here's What You Need to Remember: The nightmarish accident, combined with two other cataclysmic carrier fires, forced the Navy to implement major reforms of its safety culture—but the Forrestal experienced additional damaging fires in 1972 and 1978.

As the United States prepares to deliver its second one-hundred-thousand-ton Gerald Ford-class supercarrier later in 2019, it’s easy to forget that until the mid-1950s the Navy’s carriers displaced between a third or half that much.

In 1948, the country’s first secretary of defense, James Forrestal, ordered the USS United States, a supercarrier displacing seventy thousand tons designed to carry up to eighteen large strategic bombers off its deck. The CVA-58 attack carrier was essentially the Navy’s bid to compete with the Air Force’s plans for a large force of B-36 Peacemaker nuclear bombers. However, mere days after the United States was laid down, Forrestal’s successor Louis Johnson canceled construction, resulting in an inter-service furball detailed in a companion article.

Though the Navy’s reputation emerged battered by United States controversy, months later the Korean War broke out—and the Navy’s Essex-class carriers and their jet fighters more than proved their worth. Thus by 1951 the Navy finally had the prestige and funding to take a second crack at ordering a super carrier, which began construction the following year. By then, new carrier-based jets like the A-3 Skywarrior carrying lighter-weight nuclear weapons had rendered the carrier-strategic-bomber concept unnecessary.

Nonetheless, the sixty-thousand-ton CVA-59, fittingly named the Forrestal, was clearly informed by the canceled CVA-58—including initially attempting to incorporate smokestacks and an island superstructure that could telescope downwards for a ‘flush’ deck during flight operations. This proved too complicated to implement, so the Forrestal ended up with two islands instead, mounting multiple radars and electronic warfare systems.

Like the preceding Midway-class, Forrestal had an armored flight deck—but its deck was more robustly integrated as a load-bearing element of the hull rather than as a superstructure. As the Midway-class had proven infamously top-heavy and unstable, the Forrestal featured a deeper draught, keeping her deck drier and affording her much better handling. Three starboard side elevators served two catapults on Forrestal’s bow; and a lone port-side elevator was situated in front of two additional catapults.

Three critical innovations first developed by the Royal Navy were retrofitted in the middle of the construction of Forrestal and her sistership Saratoga in Newport News, Virginia. These included an angled flight-deck, allowing for longer takeoff distances; an optical mirror-landing system; and steam-powered catapults. Cumulatively, these greatly facilitated operations of faster and heavier jet aircraft.

These technologies were initially tested on Midway-class carriers, but the Forrestal was the first U.S. carrier to launch with them already installed.

The Forrestal’s increased length (326 meters) and displacement equated to drastically greater internal volume. Its cavernous hangar deck could accommodate eighty to one hundred jets, up from the Midway class’s sixty to seventy-five. Compared to the Essex class, the Forrestals carried three times more aviation fuel (1.3 million gallons) and 154 percent more munitions (1,650 tons) for their air wings, as well as 70 percent more fuel for cruising. By one calculation, this meant the Forrestals could remain operational 96 percent of the year, compared to 60 percent for the Essex-class.

Following the launch of Forrestal and Saratoga in 1955 and 1956, construction of the Ranger and Independence began, with an angled flight deck planned from the outset. As a result these two ships have only one island structure instead of two and a slimmer forward deck. The Independence finally launched in 1958, the only one of four vessels to be built in New York. Four more planned Forrestals were instead laid down as part of a revised Kitty Hawk-class.

The gigantic super carriers soon were routinely deployed on diplomatic missions and shows of force in response to the crise du jour. For example, the Independence participated in the blockade of Cuba during the Cuban Missile Crisis, while Ranger cruised by North Korea following the seizure of the USS Pueblo.

However, the large vessels had their flaws. The port elevator’s location forward of two catapults meant it could not be used during landing or takeoff operations. The sponsons for the eight 5” anti-aircraft guns took on water, and were mostly removed in the 1960s. The ships also extensively incorporated asbestos, later resulting in asbestos-related illness among their crews.

The Forrestals all deployed for at least one combat tour during Vietnam. The Saratoga’s air wing launched thousands of sorties bombarding North Vietnamese forces in 1972–1973, losing six aircraft to enemy fire and shooting down two MiGs.

The Forrestal’s Vietnam service is best known for the tragic incident on July 29, 1967, when a Zuni rocket accidentally launched from an F-4 Phantom on the flight line blasted into an A-4 Skyhawk in front of it. The resulting fire caused an unsafe M65 bomb to detonate, triggering chain reaction of explosions and fiery conflagration that nearly destroyed the carrier and killed 134 crewmembers. The Forrestal limped home and had to be extensively rebuilt.

The nightmarish accident, combined with two other cataclysmic carrier fires, forced the Navy to implement major reforms of its safety culture—but the Forrestal experienced additional damaging fires in 1972 and 1978. The Ranger, meanwhile, was sabotaged by sailors opposed to the Vietnam War, culminating in the trial of an anti-war Navy fireman who purportedly disabled one of the carrier’s reduction gears used to generate power.

During the 1970s through 1980s, the Forrestals (save for the Ranger) underwent twenty-eight-month Service-Life Extension Programs. The carriers were re-designated general-purpose CVs as they incorporated F-14 Tomcat interceptors and S-3 Viking anti-submarine aircraft into their air wings which smaller Midway-class carriers could not operate. Eight-cell Sea Sparrow missile launchers and automated twenty-millimeter Close-In Weapon Systems replaced antiquated flak guns.

The 1980s proved eventful for the aging carriers. The Independence spearheaded the 1983 U.S. invasion of Grenada, dispatching Navy SEAL teams and A-7 Corsair jets for close air support. F-14s from the Saratoga forced down airliner carrying terrorist hijackers in 1986 and accidentally shot down an Air Force Phantom jet in 1987. Her strike planes also destroyed a Libyan surface-to-air missile sight that had earlier opened fire on U.S. aircraft.

During the 1991 Gulf War, the Saratoga deployed to the Red Sea and Forrestal to the Persian Gulf. Between them, the two carriers dispatched hundreds of sorties, but lost one FA-18 Hornet to an Iraqi MiG-25 and two A-6s to ground fire. Saddam Hussein even specifically claimed to have sunk the Saratoga, following an attempted Scud missile attack that missed by over one hundred miles.

As they each approached forty years of service, the Forrestals were decommissioned one-by-one between 1993 and 1998—but stayed busy right until then. In 1993, Ranger deployed off of Somalia and provided photo reconnaissance, logistics and air support for Operation Restore Hope as it faced opposition from warlord Mohamed Farah Aidid.

In 1992 the Saratoga accidentally fired a Sea Sparrow missile at the Turkish destroyer Muavenet during an exercise, killing five crew.

The Independence concluded her career with forward-deployment to Yokosuka, Japan, and participated in a 1996 cruise down the Taiwan Strait that famously ruffled Beijing’s feathers.

The Forrestals remained mothballed through 2013 and there were multiple campaigns to transform them into museum ships which all came to naught. Finally, between 2014 and 2017, all four vessels were scrapped in Brownsville, Texas—each operation paid for with a single penny.

The Forrestal-class marked the point at which U.S. carriers decisively evolved into larger platforms intentionally designed for jet fighter operations, pioneering technologies we now take for granted in today’s super carriers. While the art of super-carrier design would be further refined, the Forrestals marked an influential first step.