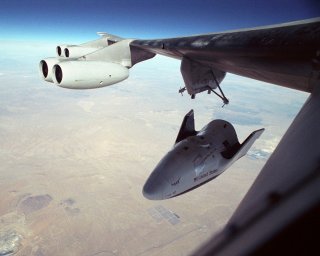 Here's What You Need to Remember: What was unique about the X-38 was that it was truly an international effort that involved the European Space Agency as well as the German Space Agency DLR.

Science fiction movies are filled with the ubiquitous “escape pod”—the small capsule or craft that could be used (as the plot required) for someone to escape from a spaceship in a hurry. While a key plot point of the original Star Wars hinged on the use of such a device, the concept of an “escape unit” in a spacecraft was first seen in the 1966 film Thunderbirds Are Go.

Creating such a craft for puppets likely proved far easier than real-world efforts, yet the United States Air Force and NASA had long seen the need for such small craft that could help return crews safety back to the ground. Aircraft such as the Bell X-2, B-58 Hustler and XB-70 Valkyrie all featured small capsules as the aircraft flew too high and fast for the conventional ejection seats.

For spacecraft the need was even greater, but it took until the 1990s for NASA to develop what was essentially seen as a “lifeboat” or emergency crew return vehicle (CRV) for the International Space Station (ISS). This was the X-38, which was designed for such times when a crew member became ill or was injured while the space shuttle was not on station. It was meant to be able to transport a total of seven astronauts back to Earth—compared to the three that could escape aboard the Russian-furnished Soyuz capsule.

In addition, the X-38 CRV was meant to be used if there was a catastrophic failure of the station which made life support impossible while the shuttle couldn’t provide timely access. Alternatively, it could be if a shuttle problem precluded station resupply or crew exchange in a required time period.

Development of the X-38 began with an in-house study at the Johnson Space Center (JSC) in 1995, and the project largely used available technology and off-the-shelf equipment as a way to significantly decrease its developmental costs. This included the use of a flight computer that was currently in use in aircraft at the time, as well as a flight software operating system that had many aerospace applications.

What was unique about the X-38 was that it was truly an international effort that involved the European Space Agency as well as the German Space Agency DLR.

The craft was meant not as a “space taxi” to get crews to and from the ISS, but rather was simply meant as a lifeboat to get folks back to earth. It was small enough to have fit into the payload bay of the shuttle and would have been semi-permanently docked to the ISS.

It was designed with life support supplies for about nine hours of orbital free flight from the space station. Its landing was almost meant to be fully automated with only backup systems to allow the crew to control orientation in orbit, select a deorbit site, and if necessary steer the Parafoil Landing System (PLS)—the stage parachute system that would provide stabilization, deceleration and final descent after the craft re-entered the atmosphere.

Three prototype X-38s were used in atmosphere flight testing where the autonomous vehicle deployed from a B-52. This included a January 19, 2000 parafoil test over the U.S. Army’s Yuma Proving Ground in Arizona, which involved using the largest parafoil parachute ever deployed. It was one and a half times as big as the wings of a Boeing 747.

Despite the potential that the X-38 offered, just months after a December 2001 flight—the longest of the eight flown by the experimental craft—the project was canceled; a move that was protested by the European Space Agency. Nearly 20 years later the dream of a space taxi remains unfulfilled and the ISS is still without a reliable lifeboat.